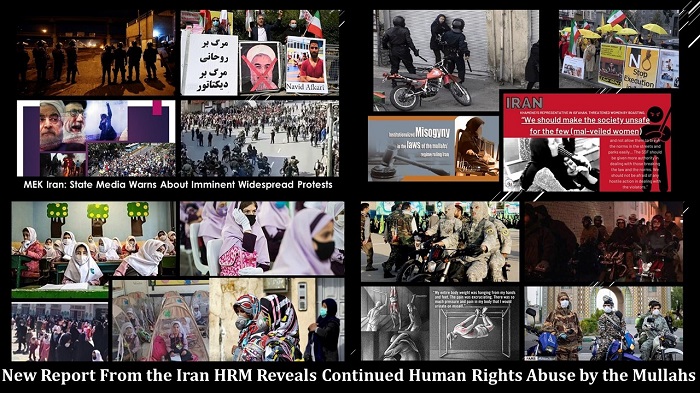 A new report issued by the Iran Human Rights Monitor (Iran HRM) has focused on the repression used by the Iranian regime on any kind of protest, however mild and peaceful. The monthly report also includes concerns raised about Iran’s irresponsible policy of using Covid-19 against its own people and the execution of wrestler, Navid Afkari, despite an international campaign to prevent it.

Over 118,600 people have died of coronavirus across all of Iran’s 31 provinces, according to reports by the People’s Mojahedin Organization of Iran (PMOI / MEK Iran).

The report includes these statements: “The regime has been trying over the past months to end off anti-regime protests by deliberately sending people to their death by the early opening of businesses, and the reopening of schools without providing the necessary hygienic equipment and sanitary facilities. Seemingly, this tactic has not worked out as the regime has failed to contain the volatile society.”

“In step with the growing social disgruntlement, the Iranian regime officials have resorted to new means of imposing repression. The IRGC put up a show of force by announcing the formation of “hit squads” and “Bassij local patrols” to preserve the ‘security of neighborhoods.’”

The main Iranian opposition to the mullahs’ regime #NCRI and (#PMOI #MEK), has reported gross human rights violations due to corruption among the mullahs regime’s top officials who live a lavish life of luxury in #Iran. https://t.co/xea2UpXSaD pic.twitter.com/uARdtVWXuS

The mullahs have attempted in desperation to use executions and death sentences to subdue the rising tide of discontent in Iran. Navid Afkari was arrested back in 2018 for his role in the 2018 protests. He was sentenced to prison and then he was sentenced to death by execution. He was finally executed on September 12th this year despite a widespread campaign waged internationally to get the regime to reconsider the death sentence against Navid. The Iran HRM reported that the final decision had been made by Supreme Leader, Ali Khamenei.

The Iranian regime doesn’t stop at the odd execution of political prisoners. It routinely uses torture against anyone arrested and accused of being a dissident or protester. The Iran HRM gave details of how the torture was often used mercilessly. “On September 1, 2020, the Interior Ministry’s deputy for security and order, Hossein Zolfaqari, announced that the number of general calls for protest in Iran had increased three-fold compared to the previous year. Four men were ordered to have four fingers on their right hands amputated. The prisoners previously claimed that they were forced to confess under torture, and one of the prisoners, Hadi Rostami, cut his wrists in June to protest the upholding of his sentence earlier this year.”

The clerical regime tortures and humiliates young people in #Iran streets. Black-clad guards encircle &brutalize youths, battering their human dignity in a bid to prevent outbreak of our nation’s wrath. But they only add fuel to the fire by such desperate measures. #IranProtests

The Iranian opposition, NCRI and (PMOI / MEK Iran), says that the publication of the latest monthly report shows that international action must take place to prevent the mullahs from continuing their barbaric acts. As NCRI President-elect, Mrs. Maryam Rajavi the President-elect of the National Council of Resistance of Iran’s (NCRI), has said; “I urge the international community, especially the United Nations Secretary-General and other Human Rights organizations, to intervene immediately to stop the executions, secure the release of the prisoners, and prevent a major humanitarian catastrophe in Iran’s prisons.”

Iran: Families of Martyrs Echo Call for Investigation into 1988 Massacre