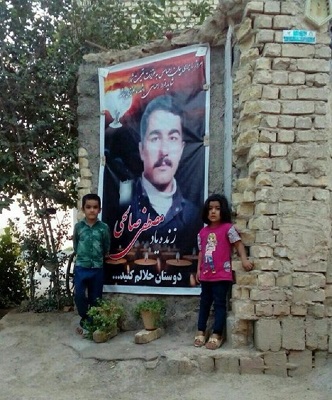 The Iranian regime, angry at the protests they received from Iranians and other governments after they executed Mostafa Salehi, has hit back by ordering his widow to pay 425 million tomans in blood money or they will confiscate the house she lives in with her two children.

This shows how the regime is unlike any other government; adding punishment onto a dead person under the guise of blood money for the agents wounded during the December 2017-January 2018 uprising. Notably, these agents were killed suppressing and killing protesters.

#MostafaSalehi, 33, was a construction worker and also ferried passengers to support himself and his family.

Salehi, 33, who was a construction worker and taxi driver, left behind two children; Amir Hossein, 6, and Nazanin, 4. He was charged with killing a Revolutionary Guard officer in Kahrizsang, Najafabad, during the 2017-8 uprising.

Salehi spent eight months in solitary confinement in the Intelligence Ministry’s prison in Dowlat-Abad and five months in solitary in Dastgerd Prison; handcuffed and shackled with no mattress, hardly any food, and not allowed to visit anyone.

He was tortured; suffering broken limbs and teeth, as well as damage to the neck and spine. Still, he did not submit to a forced television confession, so they finally hanged him on August 5.

#Iran’s ruling mullahs have surpassed all boundaries in ruthlessness. Those who under the mask of “families” shed crocodile tears for PMOI members, are demanding the bereaved wife and orphaned children of #MostafaSalehi to pay for the execution of their husband and father.

Maryam Rajavi, the President of the National Council of Resistance of Iran (NCRI), said: “The mullahs’ Judiciary abhorrent verdict against the wife and children of Mostafa Salehi demonstrates that the brutality and inhumanity of the ruling mullahs know no bounds. The very people who, under the guise of family members, shed crocodile tears for the Mojahedin (MEK), are demanding payment from Salehi’s bereaved wife and orphaned children for hanging him. Shame on this regime and all its advocates and mercenaries. The mullahs must be expelled from the world community. Silence and inaction amount to ignoring the values for which humanity has offered millions of lives.”

As you can see, the inhumane mullahs are not content until they have destroyed the resistance. First, they ended the protests through intimidation and violence. Then, they arrested and tortured protesters. Even after executing the protesters, the mullahs are trying to throw their families out of the homes.

The goal is to frighten more people against joining the MEK Resistance units and fighting the regime. The mullahs know they won’t win a fair fight against the people so they are trying to intimidate the people.

The #MEK Resistance Units are groups of #Iranian activists who have revolted against the current regime. They are small cells of resistance of the Iranian opposition movement, working together to play a leading role in Iran’s protests. #MEK pic.twitter.com/XDWxWhoDtY

The world should challenge this and hold the mullahs to account for their crimes against humanity.