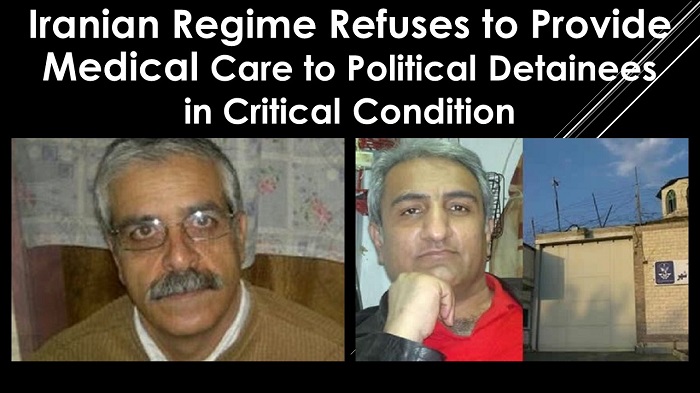 In 2000, Afshin Bayemani was sentenced to life in prison for collaborating with  the People’s Mujahedin of Iran (PMOI / MEK Iran) on the basis of “waging war on God.” The Appeals Court maintained the ruling at the time, but it was commuted to life in prison in 2006.

Abolghasem Fooladvand, 59, is serving his seventh year in Rajai Shahr Prison in Karaj after being detained in 2013 and sentenced to 15 years in prison by the Revolutionary Court on charges of “moharebeh through supporting the People’s Mujahedin of Iran (PMOI / MEK Iran)“. The two inmates have now been denied sufficient medical attention and transported to a hospital by the authorities.

Due to his deteriorating condition and symptoms of a heart attack, Abolghasem Fouladvand was brought to Madani Hospital on Saturday night. However, on July 11, he was sent to prison without completing his treatment and while still suffering from a cardiac problem.

Despite his cardiac condition and the opinion of experts who saw the need for mitral valve surgery, Afshin Baymani, who recently undergone angioplasty, has been denied medical care thus far. He should be moved to a specialized medical center outside of prison for mitral valve surgery, as doctors recommended, but prison medics just gave him sublingual tablets and did an ECG.

Despite experts’ recommendations, Vaziri, the Prosecutor’s special assistant for political detainees’ matters, has refused to permit his transfer to a hospital.

On March 11, Afshin Baymani was taken to the jail infirmary with acute heart discomfort, but Amin Vaziri refused to let him go to the hospital.

Kidney stones and diabetes plague him. He’s also had coronary heart disease since July 2017 as a result of years in deplorable prison circumstances.

Minimum Rules for the Treatment of Prisoners

The provision of adequate medical treatment is required by international and Iranian law. Detainees must be sent to a hospital outside the jail institution if necessary, according to Iran’s official prison organization regulations.

And per the United Nations Standard Minimum Rules for the Treatment of Prisoners, authorities must transfer all detainees who require specialized medical care to specialized institutions, including civilian hospitals.

Iranian authorities, on the other hand, often apply pressure on detainees, particularly political and religious inmates, by refusing them medical attention.

Many prisoners in Iran’s prisons have either grown dangerously ill or have long-standing and serious medical issues that have gone untreated. Behnam Mahjoubi died on February 21, 2021, after untreated acute neurological difficulties, in an instance that shows Iranian authorities’ denial of vital medical care to prisoners of conscience.