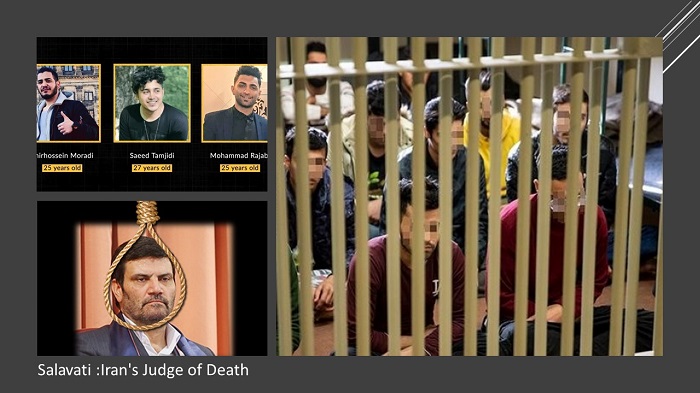 Amir Hossein Moradi, Saied Tamjidi, and Mohammad Rajabi are three young political prisoners that were arrested during the November 2019 uprising. Their lawyer has confirmed in recent days that the death sentence for each of these young men has been upheld.

The lawyer said in a post on social media that he has not even had access to the case or the files, and confirmed that the Supreme Court upheld the death sentences despite the appeals that were filed.

The three men were handed their sentences by Abolghasem Salavati of Branch 15 of the regime’s Revolutionary Courts in the country’s capital. Salavati has sentenced many political prisoners and dissidents to death throughout his career. He was also sanctioned by the US Treasury Department in December last year for several reasons including his role in censorship and “other activities that prohibit, limit, or penalize the exercise of freedom of expression or assembly by citizens of Iran”.

Moradi, Tamjidi, and Rajabi have all protested the torture that they have been subjected to by regime authorities. They are accused of leading riots that involved banks and petrol stations being torched during the nationwide protests in November last year. The authorities said that they videoed the activity they were involved with and sent them to foreign media outlets.

Their trial took place in January this year and it was unfair. Amnesty International described it as “grossly unfair” for several reasons, including the fact that the three men were denied access to their lawyers.

Unfortunately, it is not uncommon for prisoners, especially political prisoners, to be denied access to a lawyer during their trial and many human rights organizations and activists have been drawing attention to this for years.

Moradi, 25-years-old, was identified by regime authorities through CCTV footage. After his arrest, he was held in a Ministry of Intelligence & Security (MOIS) detention center and then transferred to the notorious Evin Prison just outside Tehran. He was tortured, beaten, subjected to electric shocks, and was forced into making a false confession. He was then made to appear on television to “confess” and this footage was used against him in court.

The other two men, Rajabi, 25, and Tamjidi, 27, were arrested in December. They too spent time in an MOIS detention center. Like Moradi, they were also tortured during detention.

The use of the death sentence in Iran is something that human rights activists and organizations have been drawing attention to in recent years. Iran is the biggest executioner per capita in the world and the regime has no intention of putting an end to this practice. The regime uses the death penalty as a tool of suppression and it is trying to add to the atmosphere of fear that it is attempting to create.

The regime even openly said that “rioters” will be dealt with “decisively”, warning that those charged with “corruption on earth” will not get off lightly.

The People’s Mojahedin Organization of Iran (PMOI / MEK Iran) released the names of some martyrs of the November 2019 uprising that swept nearly 200 cities across Iran. The (PMOI / MEK Iran) has confirmed more than 1,500 martyrs in different provinces across the country.