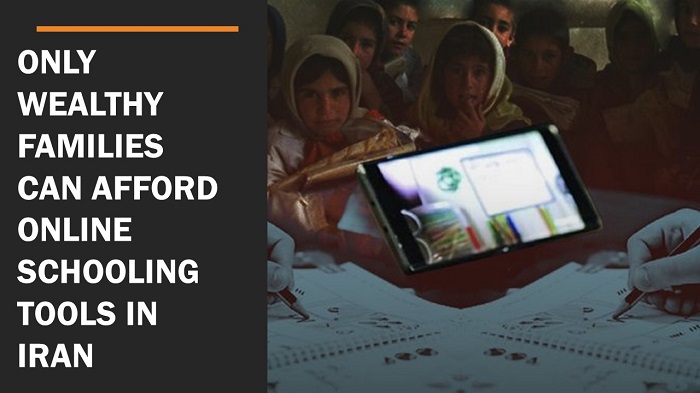 Covid-19 has been a double burden for many poor families in Iran. Over 157,900 people have died of the coronavirus in Iran, according to reports by the Iranian opposition The People’s Mojahedin Organization of Iran (PMOI / MEK Iran), and the National Council of Resistance of Iran (NCRI). Low paid workers could not afford the luxury of staying at home when the epidemic wave first swept across the country in the Spring. They had to go to work to eat and pay the bills.

When schools were closed, the Education Ministry created an online schooling program, but it meant that children needed a tablet or smartphone to get online. Again, this affected poorer families the most because most could not afford to provide a device for all of their children and in many cases for none of their children.

#Covid_19 has been a double burden for many poor families in #Iran. Low paid workers could not afford the luxury of staying at home when the epidemic wave first swept across the country in the Spring. #MEK pic.twitter.com/QEaGs6BTSw

This means that while adults face an increased risk of catching Covid, their children have the choice of risking infection by going to school or being denied an education.

The early policy of closing all schools only lasted until the summer vacation. After the vacation finished, despite the fact that the regime in Iran had failed to suppress the virus, schoolchildren were encouraged to go back to school. Many teachers and schoolchildren’s parents were deeply unhappy about this decision and many families decided to vote with their feet and kept their children at home, fearing they would get infected or at least bring the virus back into their homes and infect more susceptible members of the family.

Not much joy in ‘Shad’

3.5 million school children cannot access the government’s online education program, called ‘Shad’ in Farsi, meaning ‘Joy.’ This was the estimate given by a member of the Parliament’s Education and Research Committee, Mohammad Vahidi on October 24th. The program had already been initiated back in April but resuscitated at the start of the new school year. Because children need a device to use the program at home, it automatically cuts out all those children from poorer families who are finding it hard enough to pay for food, let alone buy tablets or smartphones.

On November 2nd, Mohsen Haji-Mirzael, the Education Minister, said that “students without digital devices are not required to receive an online education. They should go to school instead.” Haji-Mirsael suggested that with fewer students going to classes (the poorer ones), it would automatically reduce the risk of transmitting the virus.

The Bushehr Education said that his headteacher gave him a phone and that he was enrolled in the online education system, but his mother says that although this promise was made, it was never fulfilled. #MEK #Iran https://t.co/3zhQjG0ib5 #FreeIran2020

The divide between rich and poor is widening

A Tehran math teacher, who teaches at a southern Tehran school in a poorer neighborhood, said: “in the southern parts of the capital where low-income families live, people don’t even have the most basic sanitary material. They cannot afford a tablet or smartphone for their children. The only alternative for students who don’t have the means to buy a tablet, or can’t go to school, was to attend classes on television but the authorities did not take the idea seriously enough.”

One idea that was suggested early on was for the state TV broadcaster, the Islamic Republic of Iran Broadcasting (IRIB), to air education programs and lessons, but despite a short period of trialing a program, it was soon discontinued. Most families in Iran, even poorer ones have a TV, even if they can’t afford a smartphone for each of their children.

The decision not to bother worrying about inequalities in resources simply widens an already wide gap between rich and poor in Iran.

Maryam Arbabi, an Iranian elementary school teacher from North Khorasan province, lost her life to the #coronavirus. Concerned about her students, she decided to continue teaching from the hospital bed until the end. https://t.co/NAiB1E7PMo #Iran pic.twitter.com/JGqK5QhTfP

Accounts of how families and schools are managing have come in from all parts of Iran. In some areas, teachers have tried having classes outside to reduce the risk of infection, but this is not possible as the weather becomes colder. Many schools in poorer suburbs of cities like Tehran and Mashhad report far fewer students turning up for lessons.

The other problem that is faced by poor and rich alike is that internet access isn’t uniformly available across Iran. Many rural parts of the country have only sketchy internet or none at all. That means that the safer online schooling is out and families have to weigh up the pros and cons of sending their kids to school and risk disease or keeping them at home and risking getting behind in their schooling.

More child marriages blamed on lack of access to education

There have been reports that the lack of access to education in some rural areas of Iran has led to an increase in child marriages. In Iran, girls can be married off as young as 13, and even younger as long as permission is granted by the father or a male guardian. No school for some families is being used as an excuse to marry off their daughters.

The problem of child marriages was bad enough before Covid appeared on the scene but is now expected to be a lot worse.

Child marriage is a significant problem in #Iran where girls as young as 10 are being forced into marriage. According to the Sharia-based law of Iran, the legal age for marriage is 13 for girls and 15 for boys. #FreeIran2020 https://t.co/r4mEHNnoG5 pic.twitter.com/4rSmtRE4Eo

Iranian government fails to provide education for all

The Iranian government is mandated by Article 30 of its Constitution to provide free schooling up to secondary school age. However, because of Covid-19, that means that online resources should be made available to all families who cannot afford them. Charitable organizations have tried to fill the gap but in these difficult times simply do not have the money to do what the government is expected to do.

The People’s Mojahedin Organization of Iran (PMOI / MEK Iran), is opposed to the regime’s oppression of women, including child marriage. The MEK and the NCRI, the Iranian Opposition offer a democratic alternative to the religious dictatorship, in which men and women can have equal representation in government.

Mrs. Maryam Rajavi, President-elect of the Iranian Opposition, has a ten-point plan to restore democratic rule to Iran after the fall of the mullahs’ regime and to ensure that child marriage is a thing of the past.