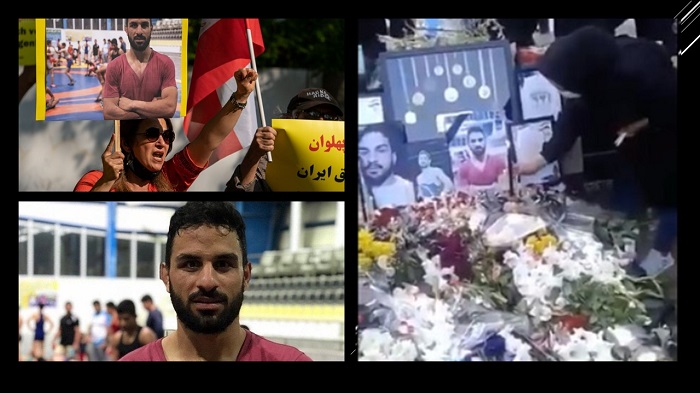 The coordinator of the Campaign for Iran Change, Struan Stevenson, has called the execution of Iranian wrestling champion and protester Navid Afkari a sign of the regime’s “desperation and stupidity” in an op-ed for United Press International (UPI).

The former member of the European Parliament also condemned the European Union for continuing its appeasement policy of the regime by not condemning Afkari’s death sentence or putting pressure on the regime to halt it.

September 17—Kahrizsang, central #Iran
Family and friends of Mostafa Salehi held a ceremony marking the 40th day of his execution.
Salehi was tortured into confessing to crimes he did not commit after participating in protests.#StopExecutionsInIran pic.twitter.com/68ftV4HMDy

Afkari, 27, was a political prisoner, arrested during protests in Shiraz in 2018, and convicted on the fake charge of murdering a city employee in that uprising. The confessions he made were extracted under torture.

His execution has nothing to do with any murder, but much more to do with suppressing protests that are sparking across Iran right now. If Iranians think that they will pay with their lives, the mullahs reason that they will not protest. The mullahs do not know the Iranian people.

Stevenson summed it up when he wrote: “Iran’s theocratic regime has added stupidity to its long list of deficiencies. Guilty of repression, corruption, terrorism, genocide, and gross incompetence, the mullahs have nevertheless succeeded in sinking even lower in the eyes of the international community by executing [Afkari].”

Afkari, a hero for his sporting prowess, was the subject of an international campaign to save his life, with sports personalities, politicians, the International Olympic Committee, and Amnesty International joining the call.

Stevenson points out that Europe as a whole did not condemn this execution, but does cite a remonstration from European Union foreign affairs spokesperson Peter Stano, but nothing from Josep Borrell, the high representative for foreign affairs and security.

The regime ignored all pleas, even though a letter from Afkari describing the torture he was under to confess, including having alcohol poured into his nose, being beaten viciously, and being almost suffocated with a plastic bag, was released. His brothers Vahid and Habib are sentenced to 74 lashes and 54 years and 27 years imprisonment, respectively, and they will also be tortured inside the prison.

Mrs. Maryam Rajavi the President-elect of the National Council of Resistance of Iran’s (NCRI): Silence and inaction give a green light to and are considered as complicity in these crimes. Once again, I call on the international community to take urgent action to release the Afkari brothers, other detained protesters, and all political prisoners who are in danger of being executed.

Once again, I call on the international community to take urgent action to release the #Afkari brothers, other detained protesters, and all political prisoners who are in danger of being executed. #NavidAfkari #Iran #StopexecutionsinIranhttps://t.co/s47i5vldFn

Stevenson wrote: “Borrell must openly condemn the mullahs for the execution of Navid Afkari. He should be joined in that condemnation by Britain, France, and Germany and the other European appeasers, who should immediately close all Iran’s embassies and expel their terrorist proxies.

The belligerent behavior of the Iranian regime proves that attempts at diplomatic negotiation or appeasement are pointless. Navid Afkari’s execution, despite international protests, is a disgrace and once again demonstrates why the leaders of this fascist theocracy must be indicted for crimes against humanity and held accountable in the international criminal courts.”

The fact that Iran has a strong and growing democratic alternative in the form of the National Council of Resistance of Iran’s (NCRI) and The People’s Mojahedin Organization of Iran (PMOI / MEK Iran), has been used by many foreign participants of the recent summit as ammunition intended to persuade Western governments to initiate a more combative and assertive policy towards the Iranian regime.

Escalation of the public crackdown, stepped up attacks on vessels and oil tankers and missile launches, and third, demonization campaigns and escalation of terrorist plots against the PMOI/MEK, the Iranian Resistance, and other opponents. #DisbandIRGC pic.twitter.com/Ca1wO66cru