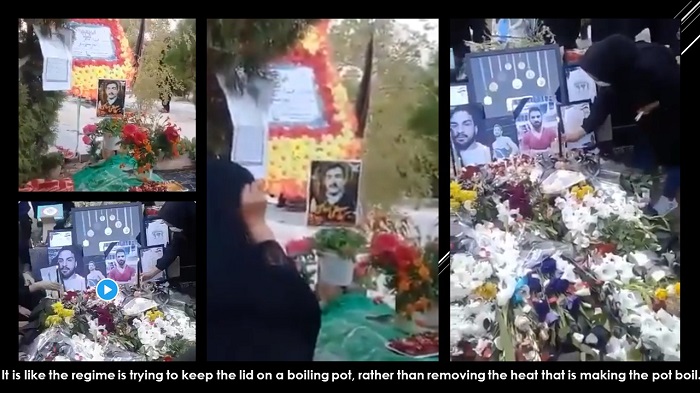 Iranians are resisting the Iranian regime’s attempt to repress them after the emotional executions of two political prisoners, Navid Afkari and Mostafa Salehi. Family members, friends, and others who knew them have gathered at Navid Afkari’s graveside in his memory. Over 800 people attended Navid’s resting place, with many of them shouting out “Navid the champion!” Navid Afkari was a famous Iranian wrestling champion. Flowers were laid by Navid’s family members, while many others expressed their outrage at his execution.

At the same time, in Kahrizsang, Isfahan province, more than 1,000 people, including family and friends of the other political prisoner who had been executed, Mostafa Salehi, attended a ceremony in his memory. Mostafa Salehi had been executed by the regime on August 5th after he had been imprisoned for participating in protests against the regime in December 2017 and January 2018.

Mostafa Salehi’s family was comforted by the participants who knew that he had been tortured by regime forces to extract a false confession on television. A typical sentiment expressed at the ceremony was “Be proud of Mostafa. Do not be in sorrow or discouraged. He is a martyr and died for the freedom of the Iranian people. We are with you.”

September 17—Kahrizsang, central #Iran
Family and friends of Mostafa Salehi held a ceremony marking the 40th day of his execution.
Salehi was tortured into confessing to crimes he did not commit after participating in protests.#StopExecutionsInIran pic.twitter.com/68ftV4HMDy

It is worth noting just how terrified the authorities are of these sorts of occasions. In the city of Behbahan, for example, which was one of the main centers of revolt in the uprising of November 2019, a gathering to honor Navid Afkari was broke up by security forces. Locals in Behbehan had arranged to mourn the death of Navid and maintained a vigil that lasted well into the night despite the attempt by the security forces to stop it. It was reported that arrests were made at the vigil.

The response of the regime to the growing dissent amongst the Iranian people has reached an impasse. The only method it seems that the regime knows is to use brutal force to intimidate people into submission.

1. Before your government executed Navid Afkari, he was repeatedly tortured and his confession televised on Iranian state TV. Do you torture all your political prisoners, or just when you want to televise their confessions and need to make sure they comply? #QuestionsforZarif pic.twitter.com/e5ThrKcDNu

The Iranian regime is running scared of dissent in the country. Apart from issuing death sentences and executing prisoners, it has now embarked on supporter of the People’s Mojahedin Organization of Iran (PMOI / MEK Iran) anywhere in the country.

Mrs. Maryam Rajavi, the President-elect of the National Council of Resistance of Iran (NCRI), called on the international community to request the Iranian regime released all political prisoners who may have to face the death penalty.

However, as the arrests, torture, and executions continue unabated, it just makes ordinary Iranians hate the regime even more. It is like the regime is trying to keep the lid on a boiling pot, rather than removing the heat that is making the pot boil. The efforts made by the regime are simply making people join together and become more determined to rid their country of the detested regime.