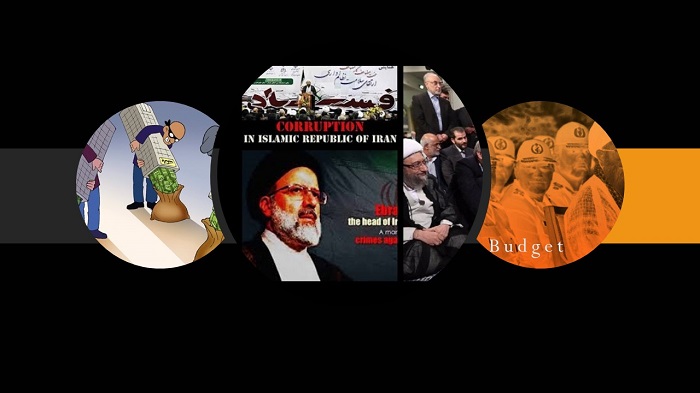 The supreme head of the Iranian regime, Ali Khamenei, appointed the infamous Judiciary Chief Ebrahim Raisi as president in the summer of 2021. During his election campaign, Raisi said that he and his incoming economic team had produced a 7,000-page economic plan that, if implemented, would result in prosperity for the people and the country.

Raisi has been in charge for six months, yet the economy continues to be beset by a slew of economic issues and skyrocketing corruption.

Khamenei is unconcerned with the country’s economy

In practice, it is clear that Khamenei and his hand-picked president are unconcerned with the country’s economy. Instead, they are solely concerned in taking from the country’s resources to enrich their loyalists and agents.

The Parliament eventually approved the abolition of the 42,000 rials preferential currency used by the regime’s officials and brokers to import the country’s fundamental and important items at a reasonable price. This will only result in an increase in the cost of food.

So far, the 42,000 rial currency has brought in $11 billion in basic goods imports, while revenue of less than $1.8 billion has reached the country’s coffers.

If commodities were imported at market rates, the government would receive $10 billion, a considerable difference in money that would end up in the wallets of regime officials.

The entire amount of smuggling has been more than $12 billion

In this context, the regime’s Parliamentary Research Center produced the following report:

“Since 2013, records from the Central Headquarters for Combating Smuggling show that the entire amount of entering and outgoing smuggling (including reverse smuggling) has been more than $12 billion, a large figure when compared to the country’s official trade figures.” Clothing, footwear, cigarettes, home appliances, and cosmetics are examples of goods,” wrote state-run Arman daily, on January 1.

The government’s institutions and statistics are leaking information regarding the country’s economic crisis. One of these is the so-called “lofty” index, which is a measure of the purchasing power of manufacturing executives and owners.

This index is based on a scale of 0 to 100. Any number greater than 50 indicates manufacturing enterprise prosperity and vice versa. This index has now dropped to its lowest level in the last four months.

“For the past four months, the lower ‘lofty’ index has reflected increased concerns among private sector entrepreneurs and business owners.

On January 5, 2022, the State-run daily Tejarat said, “Also, the main reason for the drop in the overall index in December was due to the recession in the construction, services, and agriculture sectors.”

The research underlines that procurement managers are experiencing major interruptions in currency price stability and other production costs, and are unable to foresee and plan for the following months.

State economists also warn that the economy has entered a time of recession, citing the “high” index and performance of international commerce, as well as the position of billions of dollars in smuggling and rent-seeking.