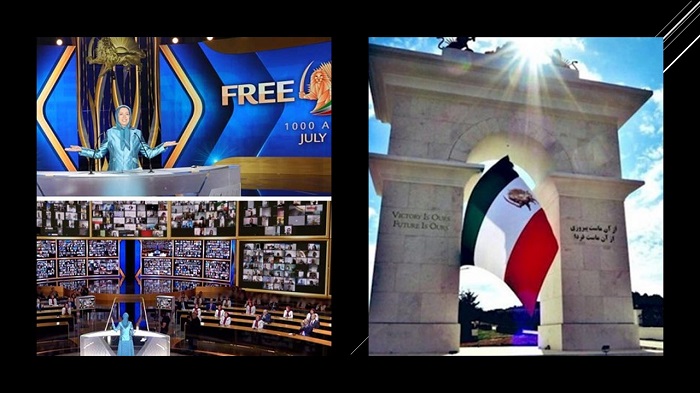 The Free Iran Global summit that was live last month was held by The National Council of Resistance of Iran (NCRI). Its aim was to remind supporters, both domestic and international, of the gains that have been made in recent years.

Much of it was due to the risk taken by MEK supporters in challenging the regime and its policies. This has taken place through connecting almost 30,000 places across 100 countries. The NCRI showed that being online gained even more support than, live gatherings had in the past.

This year’s Free Iran Global Summit had more international supporters than in previous events and supported the struggle for freedom, as hundreds of participants delivered speeches through video calls. Up to today, European countries had followed an appeasement policy which meant ignoring the Iranian people’s struggle for freedom and democracy and that there is a viable alternative to the hate and terrorism of the current regime. In fact, this way of thinking just benefited the regime but no one else in Iran.

More attention was paid to the NCRI after the uprising in 2018. This resulted in two Iranians being apprehended on the border, trying to get into France with 500 grams of TATP explosive. They were targeting the opposition’s rally at Villepinte, near Paris. This took place at a time that NCRI’s president-elect, Mrs. Maryam Rajavi had referred to as a “year full of uprisings.” However, fortunately, the possible attack was thwarted. As a result, one of the regime’s “diplomats,” called Assadollah Assadi, is now being tried in Belgium. But it is not just a single individual that should be tried but the whole regime should be made to answer for their terrorist attacks.

Due to coronavirus pandemic protocols, this year’s annual gathering was held online.Over30,000 locations across the globe joined the Free Iran Global Summit. The Summit was hosted by the #NCRI #MEK Iran at MEK’s compound in Albania.https://t.co/oX103oQpeD via @stopfundamentalism pic.twitter.com/LJ1eJiF9IA

The regime’s Supreme Leader, Ali Khamenei, admitted that the People’s Mojahedin Organization of Iran (PMOI / MEK Iran) had played a leading role in the planning and leadership of the January 2019 protests. In recent weeks a number of Friday prayer leaders described the MEK as “the most dangerous movement” and was key in its involvement in the current domestic unrest.

The MEK is still struggling to get itself heard as on July 19th one Iranian Member of Parliament stated that ‘’today, the enemies of our establishment have gathered all around the world and take all efforts to destroy us.” These words were spoken while thousands gathered online to take part in the ‘’Free Iran Global Summit’’

As the regime loses its credibility it appears inevitable that falsehoods spread about the Iranian resistance will soon disappear altogether. ‘’The quicker the international community recognizes there is an alternative to Iran’s theocratic dictatorship, the sooner its threats will be defused both at home and abroad.’’

#Iran: The #MEK in Albania
Remarks made by the Albanian figures during the 3-day “Free Iran Global Summit” show the #Iranian regime’s absolute failure in dealing with the MEK and Ashraf 3.https://t.co/wYRN1Zk3XE