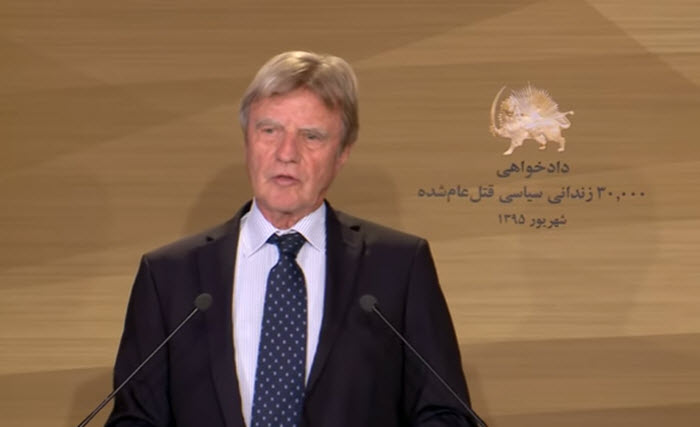 France’s former foreign minister has spoken out about a policy of “silence” in Western governments surrounding the human rights situation in Iran.

Dr. Bernard Kouchner, who was attending a seminar for Iranian-European communities said: “There [was] always this state policy I had to fight all my life, that makes it easier to leave the stones unturned, rather than turning them to see the blood that nourishes the earth. I know the state policy demands silence. “

He realises now that this policy was wrong and dangerous.

He said: “Certainly, the balance in the area was fragile, and it still is. But step by step, we forgot, we wanted to forget what was happening in Iran.”

Kouchner discussed the problems involved with trying to put the Regime on trial i.e. the length of time that has passed since the 1988 massacre.

Kouchner is counting on Hillary Clinton, with whom he has a long working relationship, to become the next president of the United States; because of her strong stance on human rights he believes that she will lead the international community to bring Iran to account for its crimes against humanity.

When talking about the 2015 nuclear agreement, he said: “Nothing changed since the agreement, and I’m not saying I was against it. Because if someone ask you to choose between a possibility of peace, or a possibility of nuclear war, obviously we prefer peace. In spite of all that, we need to know the daily reality. Everybody rushes to sign contracts in Tehran. And then we realize we signed contracts with the Revolutionary Guards.”

He finished his speech with a plea that the victims of the regime should not be forgotten and not be allowed to die in vain.

He said: “They’re the reason we have to act once more, and they won’t let us forget all the human rights violations. Their sacrifice is a reminder, their names shall be repeated, and we shall say each time, that we owe our hope to them. Thank you for not forgetting them, and thank you for reminding us of the necessity of this everyday battle we have to give in the name of those who died, but a battle we also have to fight against ourselves. We can’t let the human rights idea die.”

Those in attendance at the seminar, held in Paris at the National Council of Resistance of Iran headquarters, included Maryam Rajavi, president-elect of the Iranian Resistance, Ed Rendell, former leader of the US Democratic Party, Struan Stevenson, President of the European Iraqi Freedom Association.