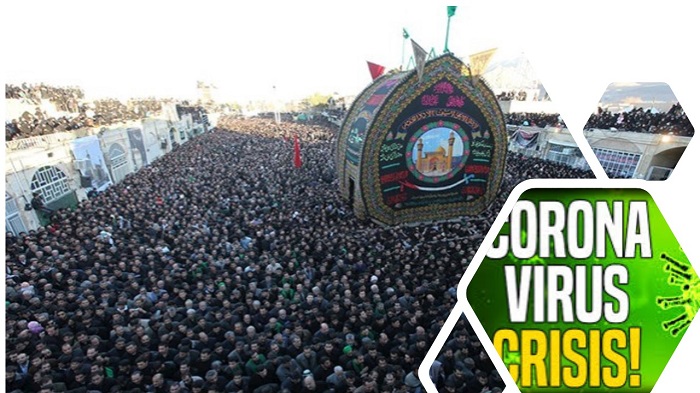 On Sunday, Iranian President Hassan Rouhani spoke about the pressure he is under with regards to mourning gatherings for Hossein ibn Ali, the grandson of Prophet Muhammad, and Muharram ceremonies.

He said during the Coronavirus Task Force meeting on Sunday that it would be “unbearable for society” if mourning during the month of Muharram was not allowed because of the health crisis. President Hassan said that mourning ceremonies could go ahead, but just in smaller groups than usual.

However, medical professionals and a number of members of the Coronavirus Task Force are against ceremonies being held, saying that it is impossible for health protocols to be adhered to in such situations.

One of the members of the task force, Minou Mohrez, said that health protocols are not compatible in this situation, saying that even masks will not stop the spread of the virus. Ms. Mohrez also highlighted that the virus has changed over the course of the past few months, explaining that the “contagiousness has increased tenfold”. She said that the hospital she works at in Tehran has seen a sixtyfold increase in the number of patients since the month of April.

A group of doctors and medical staff have written to state institutions, urging them to make sure that mourning ceremonies in the month of Muharram are not held because there will be a certain rise in the number of cases and deaths.

Since the beginning of the outbreak, the Iranian regime has mismanaged the situation and its actions, or lack of actions, have resulted in the virus spreading rapidly across the country. In the beginning, it covered up the first cases that were detected to ensure that more people participated in the sham parliamentary elections.

A member of the Coronavirus Task Force, Mohammad Reza Mahboubfar, recently spoke about this, saying: “Exactly one month before the official announcement of the coronavirus outbreak in the country, which means in mid-December, the first coronavirus patient was observed, but at that time the government covered up the news due to political and security reasons and after the event of the anniversary of the Islamic Revolution on February 12 and legislative elections, they made it public.”

More than 86,200 people have died of the novel #coronavirus in 373 cities checkered across all of Iran’s 31 provinces, according to the Iranian opposition PMOI/MEK.

President Rouhani has tried to portray the country as dealing with the pandemic very well. He has said on numerous occasions in the past that the country was dealing with the virus better than some Western countries and even refused aid from abroad. Rouhani is now saying that it is a worldwide phenomenon to which there is not yet a solution.

Yet the country’s deputy minister of Health and Medical Education pointed out that there are more than a hundred countries that have dealt with the pandemic so well that the death toll is now at zero, or at least in single figures. The deputy minister has also said that the real number of cases and deaths is at least double what the Ministry of Health is claiming.

The People’s Mojahedin Organization of Iran (PMOI / MEK Iran) announced on Tuesday that over 86,700 people had died of the Covid-19 since the beginning of the outbreak.

More than 86,700 people have died of the novel #coronavirus in 373 cities checkered across all of Iran’s 31 provinces, according to the Iranian opposition PMOI/MEK. pic.twitter.com/vjKPqrtqkJ