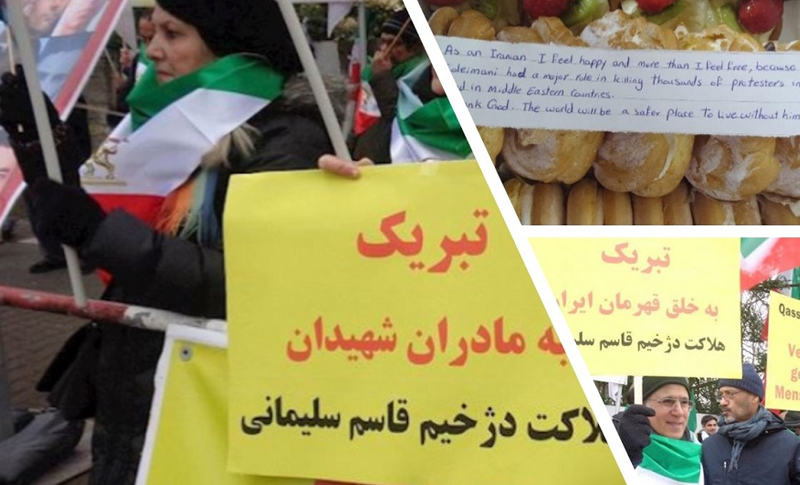 The death of the Iranian regime’s top terrorist in a US drone strike on Friday has been celebrated by Iranians and their supporters around the globe, as we as by many in the Middle Eastern countries where he committed so many atrocities.

The mullahs announced three days of mourning, following the elimination of Revolutionary Guards (IRGC) Quds Force chief Qasem Soleimani in Baghdad on January 3, and held a funeral that served as a propaganda stunt with millions of people forced or bribed to take to the streets and fake sorrow for the death of a man they called the “child killer”.

However, even the risk of arrest and other ill-treatment could not stop Iranians from privately rejoicing in his death, serving each other cake in their houses and thanking the US on social media for the drone strike.

The Iranian Resistance Units, which is linked to the People’s Mojahedin Organization of Iran (PMOI/MEK), celebrated his death by putting up posters of the Resistance leaders that said the end of the regime was near.

In Germany, supporters of the Iranian opposition coalition National Council of Resistance of Iran (NCRI) held a rally outside the regime’s embassy, where they highlighted that Soleimani was responsible for the murder of hundreds of thousands of civilians, which is a crime against humanity.

More scenes of Iranians celebrating the killing of IRGC Quds Force chief Qasem Soleimani. Many say they haven’t been so happy in a very long time.

The demonstrators held signs that read, “Time for change in Iran. We support the nationwide uprising”, and called on the German government to adopt a firm policy on Iran.

The Syrian opposition also celebrated Soleimani’s death, given that he was responsible for the death of thousands upon thousands of Syrian civilians as the Iranian regime propped up the Syrian government during the nine-year-long civil war.

One demonstrator in Idlib held a sign that read: “We are extremely happy over the death of Qasem Soleimani, the terrorist.”

While Ahmad Ramadhan described Soleimani as the “murderer of Syrian children and freedom-loving Iraqis”, which actually sums up the Iranian regime as a whole.