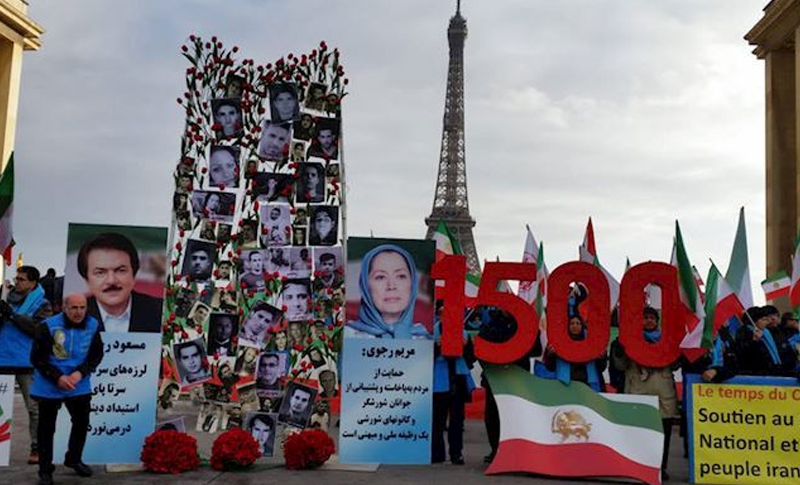 The Iranian Regime was extremely concerned over sparking another nationwide protests on the 40th day of memorial of martyrs killed by the security forces.
During Iran November protests, the iranian regime has resorted massive crackdown measures on Thursday, December 26. It had cut off internet in many areas across Iran and units of the Revolutionary Guards (IRGC) and paramilitary Basij were dispatched to control the situation.

State Security Forces, “plainclothes” agents and Intelligence Ministry units were present. Anti-riot units were stationed in full gear and with various types of vehicles in sensitive parts of cities of Iran.

December 26 – Paris
Freedom loving Iranians & PMOI/MEK supporters holding a ceremony in memory of civilians killed by the mullahs’ regime during the November uprising in #Iran.#IranProtests pic.twitter.com/jjeB2ih2c6

The protesters were chanting:

“The only path to liberty is through rebellion and uprising for freedom.”
“We will fight and retake Iran.”
“Death to Khamenei,” referring to the regime Supreme Leader Ali Khamenei.
“Hail to Rajavi,” referring to Iranian Resistance leader Massoud Rajavi and NCRI President Maryam Rajavi.

Iran Protests 2019 Background:
Iranians traditionally mourn their dead 40 days after their passing. The Iranian regime was desperate to prevent any and all memorial ceremonies planned for the protesters killed by its forces during the Iran November natiowide protests.

• Thousands of people took part in the Iran protests.
• The protesters demanded ‘regime change’ and the overthrow of Supreme leader Ali Khamenei
• The Iranian opposition movement the People’s Mojahedin Organization of Iran (PMOI), or Mujahedin-e-Khalq (MEK), was behind much of the protests.
• According to the MEK, the number of victims who have been identified so far is 601.
• The number of martyrs of the nationwide protests exceeds 1,500. Several children and minors are among the victims.
• A large number of women and girls are among those killed and arrested during the November 2019 protests.
• The Iran protests took place in more than 100 areas of the capital Tehran.
• The protests also took place in 27 provinces.
• According to Rahmani Fazli the regime Interior minister, the protesters destroyed at least 50 police and army centers, 140 government centers, 183 police vehicles, nine seminaries, 731 state-affiliated banks, and 70 gas stations.