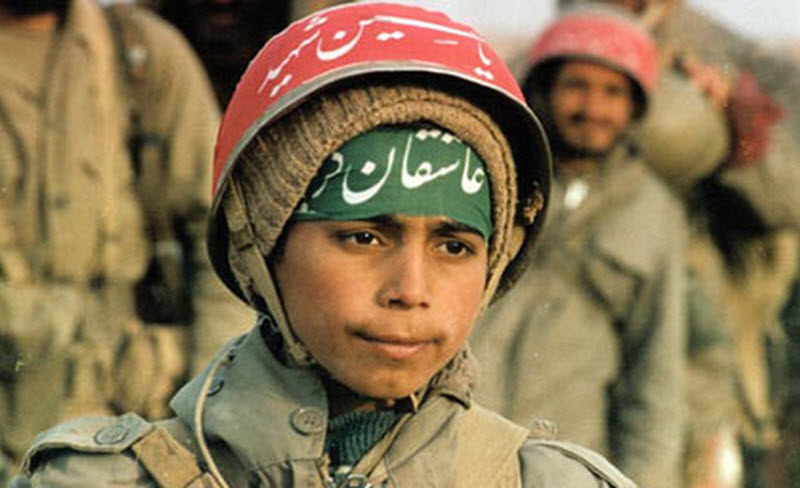 During the Iran-Iraq war in the eighties, the Iranian regime recruited a large number of child soldiers. Many of their parents were not even aware that their children had been recruited until it was too late.

Iran signed the United Nations Conventions on the Rights of the Child two and a half decades ago, but it clearly means nothing to the Iranian regime because it still continues to recruit child soldiers.

The Iranian regime’s use of children in war is appalling and one of the landmark stories in which the horrifying activity came to light was that of 13 year old Hossein Fahmideh. He, without the knowledge of his parents, left home in Qom to defend Khorramshahr city during the Iraqi invasion. He died after having a grenade belt attached to himself while jumping under an Iraqi tank.

His story was used by the regime as a way of attracting more children into joining the war. He was portrayed as the martyr for Islam and it worked because hoards of children joined, wanting to be seen as heroes too. Even though these children did not have permission from their parents, they were still allowed to join.

It is believed that more than 20,000 children were killed during the eight-year war with Iraq.

Despite signing the United Nations Conventions on the Rights of the Child, the Iranian regime has continued to use child soldiers. It often carries out propaganda campaigns to lure children into fighting for the country.

Supreme Leader Ayatollah Ali Khamenei regularly mentions the role of children in his speeches and there are countless campaigns carried out emphasising the importance of the participation of young people.

Human rights organisations have called on the Iranian government to publish data, but it has so far been unforthcoming.

International laws (and even Iranian law) recognises all people under the age of 18 as a child that cannot be held accountable for breaking the law. Furthermore, Iran is in breech of conventions that protect children during war. The Optional Protocol on the Involvement of Children in Armed Conflict prohibits states from recruiting children. Furthermore, it states that any armed group whether state-run or not should not recruit – “under any circumstances” – anyone under the age of 18 whether it be for war or any hostilities.

Iran, as we have seen in various different areas, does not hesitate to violate international conventions. Iran sees itself as a separate state that does not need to live in harmony with the rest of the world.

Faced with the Iranian regime’s use of children in war, international organisations and human rights authorities must hold the regime accountable for its actions.

No country is able to bring Iran to the International Criminal Court, but the international community can pressure Iran until it halts this barbaric activity.