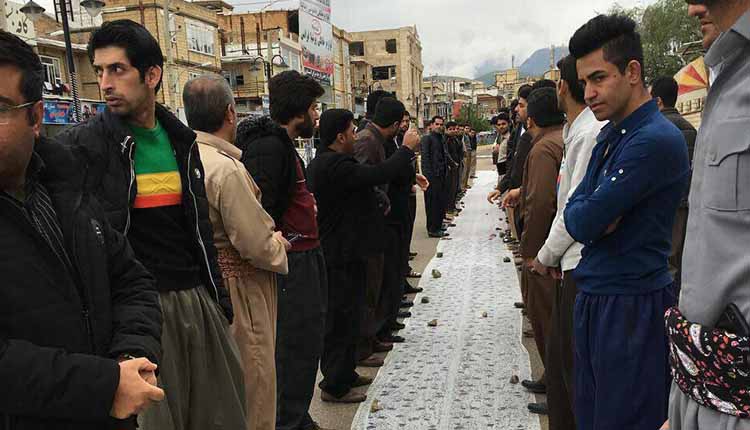 When Iran closed the border with Iraqi Kurdistan last year, trade among Kurds from the neighboring countries was effectively blocked. Now, merchants in the majority Kurdish regions of western Iran are on strike to highlight the financial losses they’ve suffered In cities such as Baneh, Javanrood, Marivan, and Saqqez no goods were available for sale in the bazaars. Instead, on April 17th, merchants placed empty table cloths on the ground to symbolize their starvation as a result of the border closing.

Iran’s strict and complicated import laws fuel smuggling. Kurdish merchants rely on “koolbars,” porters who carry goods across the boarder on foot to supply them with items like alcohol and foreign clothing — things that are not easily available in Iran. Although it is illegal, villagers on the border have engaged in this type of smuggling for years. It is a large part of the economy of Iran’s Kurdish regions.

Iranian authorities announced in 2016 that they would issue special licenses to allow the koolbars to cross the border on foot legally. However, in October of 2017, Iran closed the border. Kurdish rights groups call this an attempt to isolate and weaken Iraqi Kurds.

The pro-Kurdish rights website, Kordpa, cited a merchant as saying, “Closing down the borders used by koolbars has put pressure on the business of the shopkeepers who sold their imported goods.”

An MP from the city of Baneh, Mohsen Biglari, told officials, “As there are no alternative jobs in the mainly Kurdish populated regions in western Iran, closing down the border has disrupted the koolbars’ activity and imposed great losses on local shopkeepers.”

Abdolreza Rahmani Fazli, the Islamic Republic’s Interior Minister, declared on December 16th, 2017, that the koolbars’ activities would be banned, and fifteen border markets opened to serve the local merchants instead. Still, at that time, Fazli admitted that the proposed solution “has social and security consequences.”

On April 15th, Nejad Shahidi, Baneh’s Deputy Governor for Political Affairs said that “foreign elements” have had a pivotal role in encouraging local merchants and shopkeepers to strike and hold protest rallies. “A new plan has been devised by the Islamic Republic’s Supreme National Security Council for organizing border exchange and transactions in four regions bordering Iran’s neighbors,” Shahidi said, adding, “We have set a nine-day deadline for the shopkeepers and merchants to import whatever they need.” He warned, “Military and police forces are present to contain protests in the streets and in front of the governor’s office.”