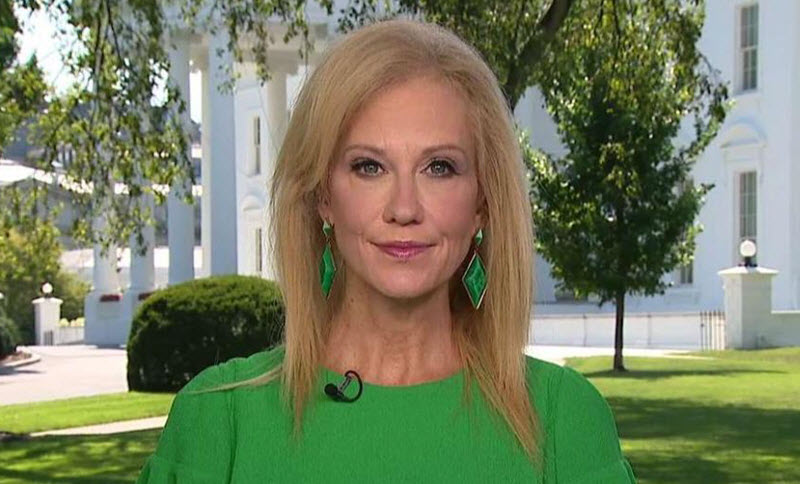 She told Bill Hemmer and Sandra Smith, co-anchors the America’s Newsroom show, that: “The president’s been very, very clear… how he feels about the developments.”

This malign behaviour includes arresting 17 Iranian nationals, who the Regime claims were recruited by the Central Intelligence Agency (CIA) to spy on Iran’s military and nuclear sites, and sentencing some of them to death.

An Iranian intelligence official told a press conference in Tehran that these arrests, of people who worked on “sensitive sites” in Iran’s nuclear and military facilities, took place over the past several months.

Donald Trump tweeted on Monday morning: “The Report of Iran capturing CIA spies is totally false. Zero truth. Just more lies and propaganda (like their shot down drone) put out by a Religious Regime that is Badly Failing and has no idea what to do.

Their Economy is dead and will get much worse. Iran is a total mess!”

Conway echoed this on America’s Newsroom, saying that “Iran has a history of lying” and that the Regime is unhappy that Trump withdrew from the nuclear deal, meaning that the mullahs lost “pallets of cash”.

Conway told Hemmer and Smith: “From day one this president has been very clear and resolute in taking action and pulling us out of that nuclear deal. And, making very clear that we will defend our friends in the region—most explicitly, our best ally Israel. That can’t make Iran happy…”

It also includes seizing a British oil tanker in the Strait of Hormuz on Friday in what is believed to be retaliation for the UK assisting in the capture of an Iranian tanker transporting oil to Syria in violation of EU sanctions.

The Iranian Revolutionary Guard Corps (IRGC) said they seized the “Stena Impero” for “violating international regulations” because they hit an Iranian fishing vessel and refused to help the boat. This story seems unlikely, however.

A representative for British Prime Minister Theresa May said Monday: “The ship was seized under false and illegal pretences and the Iranians should release it and its crew immediately.”

While US Secretary of State Mike Pompeo told Fox & Friends that this is the type of behaviour Iran has been exhibiting for 40 years, but only now is the world finally seeing the threat.

Pompeo, who believes that it is the UK’s responsibility to free the tanker, said: “I would urge everyone who’s reading that story that the Iranian regime has a long history of lying.”