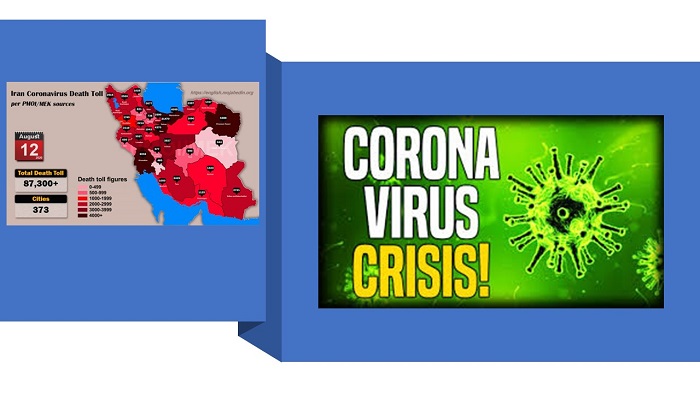 Iran, a member of the national center for the fight against coronavirus: “The current figures are 20 times higher than those officially announced”. After quoting Dr. Mohammad-Reza Mahboubfar, a member of the NCCT, as saying that the Coronavirus death toll was 20 times higher than the figure announced by the Health Ministry, the state-run Jahan-e-Sanat daily was shut down by the “Press Supervisory Board.”

More than 87,200 people have died of the novel #coronavirus in 373 cities checkered across all of Iran’s 31 provinces, according to the Iranian opposition PMOI/MEK.

This is while, the state-run Vatan-e Emruz daily had also quoted Mahboubfar, as saying, on April 28, 2020, “The current statistics of Coronavirus are 20 times higher than what is announced by the Health Ministry, and this has caused citizens not to take this deadly disease seriously.”

Referring to Rouhani’s lies, Seyed Moayed Alavian, a former Deputy Health Minister, told the state TV, health network, yesterday, “If we make wrong decisions … we are responsible for every death … Instead of trying to impress the world and offer a raw model, we must use their experiences. One of our constraints is diagnostic testing. We are short of testing kits. Was it not said that we exported our kits to Turkey and Germany? Phrases like, ‘we are not even one step behind the world in producing the Coronavirus vaccine’ are false. We should not lie to people.”

Is collective immunity at the expense of 70% of the population affected by the disease?

Mustafa Moin, head of the regime Supreme Medical Council told IRNA august 12, “Only 30 to 40 percent of the country’s capacity has been used in the management of the Coronavirus crisis.

Of course, at the forefront [of this battle], more than 100 percent of the doctors and nurses’ capacity has been deployed; however, in protecting the public’s health, the necessary resources have not been used.

The People’s Mojahedin Organization of Iran (PMOI-#MEK) announced this afternoon, August 12, 2020, that #Coronavirus has taken the lives of more than 87,300 in 373 cities across #Iran. #COVID19 https://t.co/ouMmiHGMdJ

There are also many threats, such as trying to hide the truth for political, economic, and ideological reasons. We should not hide the date of the arrival of the virus. We must follow science, and must not decide contrary to science [such as in holding] the entrance exams, mourning ceremonies, etc…. If I were in charge, I would not have allowed the University Entrance Exams nor any celebration and mourning ceremonies.

This is an ethical and humanitarian perspective. We have not been able to follow the health protocols of no more than ten people in bakery queues, how can we ensure the protocols will be followed in a crowd of a million people (at University Entrance Exams). The consequences of such damages (wrong decisions) will be anguish, chaos, and insecurity … If we wait for 70% of the population to be affected aiming for collective immunity, we have made a big mistake because, on the one hand, hospitals are overflowing, and on the other hand, those many infections will have horrific fatalities.”

The President-elect of the National Council of Resistance of Iran’s (NCRI), Mrs. Maryam Rajavi said: Many prisoners including political prisoners of Evin Prison, Great Tehran Penitentiary, the Central Prison of Urmia, among others, have contracted the COVID-19 and so, thousands of prisoners in Iran are vulnerable to the disease.