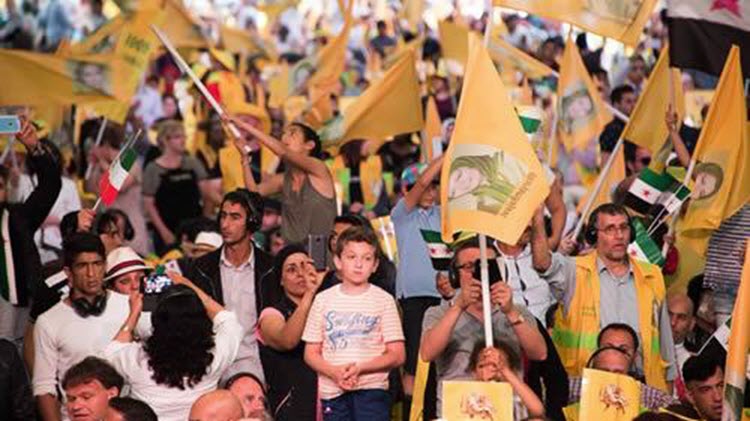 To announce solidarity with Resistance of Iran’s grand gathering on 1 July 2017 in Paris, resistant political prisoners under Mullahs dictatorship have issued statements, calling on Iranians to more than ever participate in the event.

In their messages, the political prisoners have referred to Paris gathering as the reflection of freedom-seeking of all captive Iranians, voice of the deprived and Kordestan’s toiling porters, voice of Sunnis and Balochs, symbol of Iran and Iranians’ glory, symbol of resistance and organized alternative, and the message from the raised flag ‘resistance at any price to reach freedom’.

Below is part of political prisoners’ messages released on the internet:

Now, while I’m in the corner of my cell, I see myself among you and next to you in the most magnificent, great gathering of Iranians in Paris in July. With a heart full of love and hope, I proudly greet each and every one of you who add to our nation’s valuable determination and faith.

Peace be upon you, and the delegations and guests, and peace be upon Maryam, Iran’s shining sun and great honor.

Political prisoner Arjang Davoudi: it wouldn’t be nonsense if I honestly and frankly say that MEK is now the oldest, most organized  part of the entire potential alternative that are trying to manage Iranians’ nationwide struggle to get rid of the mafia run by Khamenei and his partners. So, I hereby sincerely invite all those who have their heart set on Iran’s glory and dream of Iranians’ greatness to try to attend the Paris gathering as much as they can, and thus play a role in holding a most splendid ceremony. And know that wide participation of freedom seekers in such occasions will be heartwarming for resistant prisoners held inside the medieval cellars of an outdated velayat-e-faqih regime, killing time day and night while regretting their homeland freedom.

Political prisoner Abolghasem Pouladvand: it’s time to rise. Freedom galaxy is strongly moving forward to overthrow Mullahs regime, and now it has generously provided us with a chance to join it and thus stand shoulder to shoulder with real, freedom-seeking Iranians, Resistance family, and the freedom army.

Let’s participate and support freedom galaxy so we not only say no to Mullahs regime, but also show the world our comprehensive support of the only organized resistance inside and outside Iran, and know that there’s no other way in-between and that remaining silent or inactive means standing beside criminal Mullahs.

I hope that with your warm presence in July-1 splendid ceremony in Paris, you could carry my voice as well as my co-fighters’.

Political prisoner Mehdi Farahi Shandiz: what determines the future of Iran is not military exercises or Khamenei’s burn cards and deadlocked plans, but it’s our unity and solidarity with each other, endurance, and Iranian people’s organized resistance. So, I, as a political prisoner who for years has been in touch with torture and prison, ask you to join Resistance of Iran’s great gathering on July 1 in Paris to say no to 38 years of execution and imprisonment, and to black religious dictatorship. Join Resistance of Iran’s grand gathering in Paris on July 1 so the flag of ‘resistance at any price for Iran and Iranians freedom’ is raised higher. Shout ‘Iran freedom’ with a loud voice in Resistance’s grand gathering so the echo of your voice is heard by all Iranians and reach beyond prison walls.

To express solidarity with Resistance’s annual grand gathering in Paris, political prisoners and compatriot Balochs held in Zahedan prison, including a number of honorable Sunni clerics, have issued a statement, calling on compassionate Iranians, particularly Balochs and Sunnis, to join the gathering. The statement reads “We ask all activists and domestic and foreign compassionate people who have always stood next to us, the voiceless behind bars, and have done your best in this regard, to once again join the Resistance’s grand gathering in Paris on July 1, to defend us and help our rights be realized, so prisoners are given back the human dignity they deserve. We political prisoners strongly support Iranians July-1 gathering in Paris. Hoping the day when such gatherings are held in Iran and hoping for freedom. Hoping that prisoners will achieve their rights and also hoping that you, the dearest ones, will succeed.