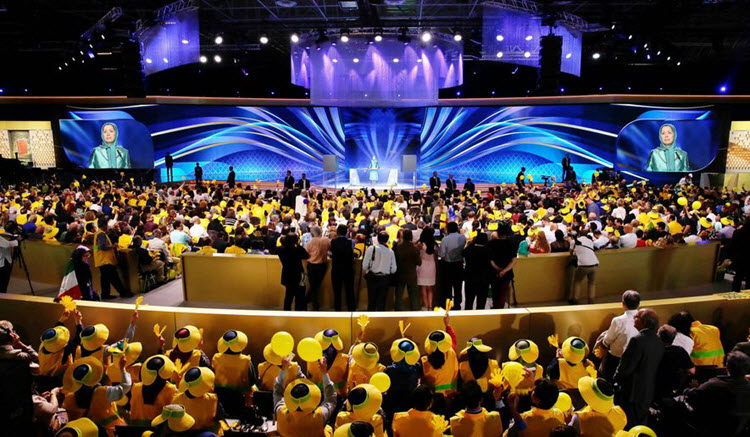 The Washington Times published an article about the Free Iran rally held in Paris on 9th July in which tens of thousands of supporters of the National Council of Resistance of Iran (NCRI) gathered “to call for the downfall of Iran’s theocratic government”.

At the rally dozens of former US, European and Middle Eastern officials spoke out in support of the Iranian opposition. One of the speakers was a key figure of the Saudi royal family, Prince Turki bin Faisal Al-Saud, the former Saudi intelligence chief. He said that he is there because he wants to see the overthrow of the government in Tehran. He declared that their fight against the Iranian regime “will reach its goal sooner or later”.

Speaker Newt Gingrich criticised the Obama administration-backed nuclear deal that was signed a year ago. The deal saw many economic sanctions on Iran lifted in exchange for an agreement by Tehran to curtail its long-disputed nuclear program. Gingrich said that the regime is untrustworthy and the deal was “insane”.

The rally which lasted for more than 9 hours was organised by the NCRI, “perhaps the only dissent group on the planet with enough money and political juice to rally tens of thousands of supporters in the heart of Europe each June behind a collective call for the overthrow of Iran’s Shiite Islamist government”.

The article spoke about the influence of the NCRI which some call the “largest Iranian dissident group in the world”. They say that the persistence and tactics of the organisation “have given it a double-edged reputation even among some of Iran’s Western critics”.

Mrs Maryam Rajavi, the President-elect of the NCRI, headlined the rally. She called on Washington to abandon the Iranian nuclear accord and “take a far more aggressive posture toward Tehran”. Before the rally, Mrs Rajavi said that the participants “represent the voice of millions of Iranians who are being oppressed in their country and who seek regime change and the establishment of a democratic, pluralist and non-nuclear government based on the separation of religion and state”.

She added: “Their expectation of the next U.S. president, as with other Western leaders, is to abandon the policy of appeasement, which emboldens the Tehran regime to intensify the suppression of the Iranian people while continuing the policy of exporting terrorism to the region.”

The article also emphasises that Mrs Rajavi refuted claims that the NCRI and its various affiliates are acting like a cult. She said: “The source of these allegations is the Iranian regime’s intelligence ministry.”

Mrs Rajavi confirmed that the organisation is “not fighting to obtain power in Iran (…) We are not even fighting for a share of power. We are fighting to create a situation where the people of Iran are able to freely elect the people they choose. I and our movement will certainly support anyone who is elected through the ballot box in the course of free and fair elections monitored internationally.”