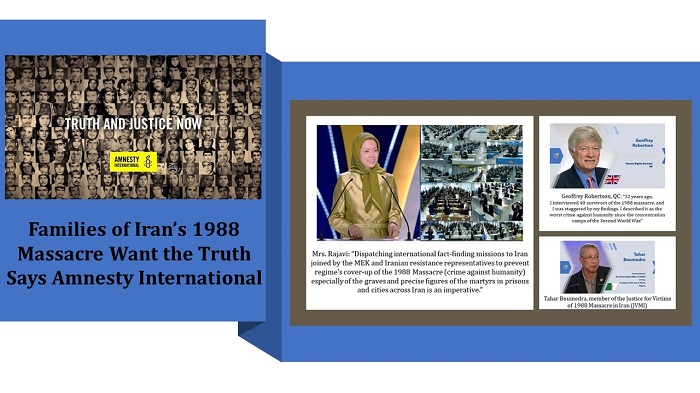 In the summer of 1988, Iran’s clerical regime ruling at the time executed thousands of political prisoners. More than 30 years on, the families and survivors are still awaiting justice for these terrorist crimes.

Recently, Amnesty International has shared parts of interviews it has had with witnesses and survivors of this massacre.

Three decades on, families and survivors are still seeking #truthandjustice.

What is more appalling is the fact that many of the victims’ families were never told where their loved ones were buried. Most of them were either members or supporters of the MEK. Many were from professions such as nurses, teachers, academics, doctors, engineers, and students. The main reason for the arrests and executions was because of their allegiance to the MEK. They participated in activities such as taking part in demonstrations and distributing information about the MEK and its plans for Iran.

Those who were imprisoned and had completed their sentences were not set free because they refused to relinquish their allegiance to the MEK.

Amnesty International has been interviewing survivors and witnesses of the 1988 massacre who now live in the MEK’s camp in Albania, Ashraf 3. The accounts such as the one spoken by Assadollah Nabavi told Amnesty that the families of those imprisoned suffered mental breakdowns as they were denied visits to the prisons. Nabavi’s father was so stressed that he had a heart attack.

A similar thing happened to former political prisoner, Ardeshir Sehat, whose family was never told the truth about his whereabouts as he was relocated from one prison to another and eventually his father died of a stroke. His brother was executed and buried in a mass grave close to their family home. No one told them and it took a year of searching to find out his burial location.

The MEK has been asking for an investigation to be carried out into these crimes against humanity. What has made matters worse for the families and the MEK is that those who took part in these mass executions in 1988 have never been brought to justice and have powerful positions within the regime today.

.@UNHumanRights must act on new report by @Amnesty & @Justice4Iran detailing destruction of mass graves related to the #1988massacre in #Iran https://t.co/xv5AVFc4Fb #StandUp4HumanRights

The NCRI’s Free Iran Global Summit was addressed by Tahar Boumedra, previously ahead of the UN Advisory Mission for Iraq’s Human Rights Office and a member of the advisory board of the nonprofit Justice for Victims of 1988 Massacre in Iran (JVMI). In his speech, he referred to the 2018 words spoken by the then human rights commissioner Zeid Hussein who said the UN told the regime to investigate these crimes. The Special Rapporteur on Human Rights in Iran was this year demanding the very same thing.

The MEK is now saying that the mullahs will never carry out their investigation into their crimes. Boumedra reminded us that the UN knew about the atrocities being carried out in Iranian prisons in 1988 but chose to do nothing about it. There were recordings by the Death Commissions which were heard in 2016 by the UN but they are still sitting on the fence. Ebrahim Raisi, who is today Iran’s Judiciary Chief could be heard on the recordings, but nothing has been done to charge him with crimes against humanity.

Boumedra says that these sorts of crimes against humanity are not locked into the statute of limitations despite being committed more than three decades ago.

He went on to finish his speech at the MEK’s Free Iran Global Summit by concluding that “The mass murderers responsible for the atrocity today run the Iranian government and judiciary. The survivors are still alive, and the evidence is all readily available. It is not a moment too soon for one democratic government to step up and file a request at the ICC for criminal proceedings to begin against Iran’s mass murderers.”

This is an abridged report written by Matin Karin for the PMOI/MEK.