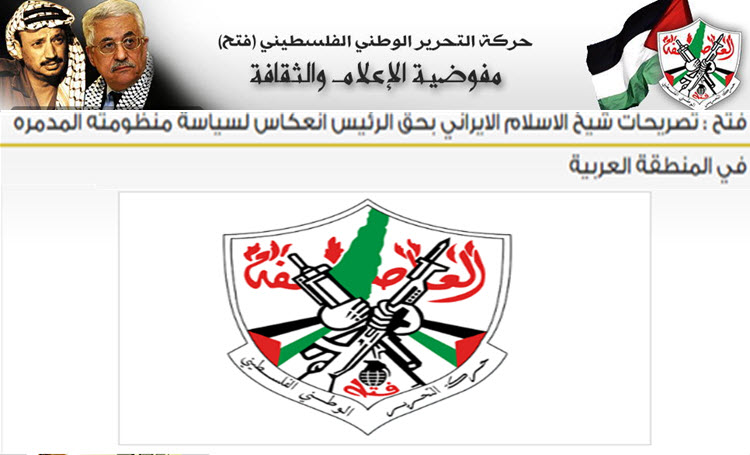 The National Council of Resistance of Iran (NCRI) have reported that Fatah’s Information and Culture Commission has slammed the remarks by the advisor to the Iranian regime’s Foreign Minister as “a reflection of the policy of his destructive system”. This is following the meeting between Iranian Resistance President-elect Maryam Rajavi and Palestinian President Mahmoud Abbas on Saturday in Paris.

On Sunday, Hossein Sheikholeslam, an adviser to the mullahs’ Foreign Minister Mohammad Javad Zarif, gave a “hysterical reaction” to the meeting in a statement. The Iranian regime’s state media published his remarks.

On Sunday, Fatah’s Information and Culture Commission responded with a powerful statement. It read:

“The Palestinian National Liberation Movement, Fatah, regards the remarks by Hossein Sheikholeslam, advisor to the Iranian Foreign Minister, about President and Commander-in-Chief of the movement, Mahmoud Abbas (Abu Mazen), as a reflection of the betrayal and the policy of those who have a destructive role and who sow divisions among Palestinian ranks and among Arab and Islamic nations and who support coups and division in our country Palestine and in all parts of Arab and regional countries.”

It also said that the Iranian regime is attempting to destroy the Palestinian ranks and worsen divisions in an attempt to get one side to act against the other so they gain greater positions which are to their own interests.

Fatah said that it was unacceptable to undermine President Abu Mazen who they called the “conscience of the Palestinian nation”. They added that they would not allow anyone to “overstep the red line of insulting or undermining his loyalty as an elected official of the Palestinian people”.

Speaking about the meeting between Maryam Rajavi and President Mahmoud Abbas, Fattah said: “We remind them that Fatah, which has in the past been hosting and supporting liberation movements of the world, preserves the right to meet with representatives of the liberation movements of the world. We continue to be a national liberation movement that strives for freedom and independence. And so we must strengthen our relations with all forces in the world who believe in and struggle for the goals of freedom and building a free and democratic society based on justice.”

The mullahs’ regime, they said, are a “stooge of the U.S. Central Intelligence Agency (CIA)” whose actions go against everything that is good for the Iranian people. They also questioned what right such a regime has to talk about the Palestinian President and the people.

“Fatah reminds the advisor to the Foreign Minister that if he has forgotten President Mahmoud Abbas Abu Mazen’s commitment to the constant principles of the Palestinian people, despite the threats to his life and political, economic and financial siege as well as plots against the Palestinian people and cause, or if he has deliberately pretended to have forgotten this, we remind him that President Abu Mazen has on 25 occasions had outspoken disagreements with the U.S. administration at times when the latter’s policies contradicted the Palestinian national interests and the U.S. tried to impose them on us.”

They stated that it is clear that the Iranian regime is meddling in Palestinian internal affairs so that it can hijack the country’s leadership to serve the regime’s regional interests while being the detriment of the Iranian people’s welfare and their good relations with the people of Palestine.