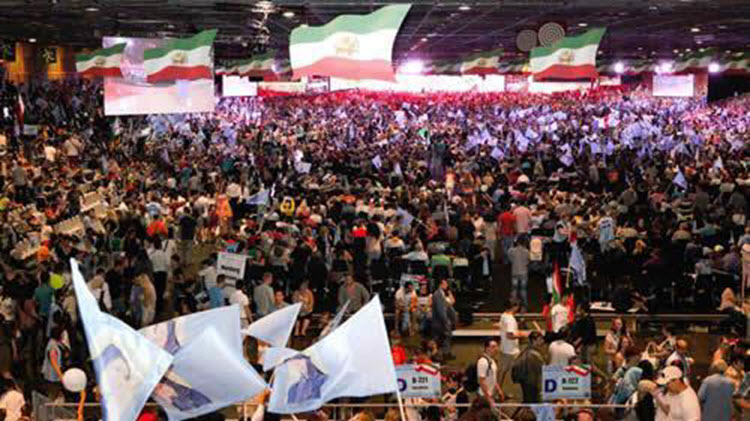 Last Saturday a massive rally was held by the Iranian opposition in Paris where a solution was offered to the conflict in an already war-torn region. The Free Iran gathering was attended by tens of thousands of Iranians and hundreds of politicians, parliamentarians, religious leaders and activists from across the world. The presence of this enormous crowd suggests that the prospects of democratic regime change are becoming more and more viable.

Maryam Rajavi, president-elect of the National Council of Resistance of Iran (NCRI), said during her keynote speech at the rally, “The winds of change have started blowing in our homeland.  The ruling regime is in disarray and paralyzed as never before. Iranian society is simmering with discontent and the international community is finally getting closer to the reality that appeasing the ruling theocracy is misguided.”

Her comments seem to have been proven with Iran’s recent presidential elections, writes Amir Basiri, journalist and Iranian human rights activist in his article for the Washington Examiner, who says the election “manifested the regime’s weakening hold on power and its inner feuds spinning out of control.”

In the days before the election, widespread activism that backed Mrs. Rajavi’s movement and called for regime change, escalated.

Former U.S. Ambassador to the United Nations, John Bolton, said at the event, ”The fact is the Tehran regime is the central problem in the Middle East. As the campaign to destroy the [Islamic State] caliphate nears its ultimately successful conclusion, we must avoid allowing the regime in Tehran to achieve its long-sought objective of an arc of control from Iran through the Baghdad government in Iraq, the Assad regime in Syria and the Hezbollah terrorists.”

Former House Speaker Newt Gingrich also delivered a speech at the rally. “The largest supporter of state terrorism in the world is the Iranian dictatorship,” he said. “Even the Obama administration kept saying that, despite everything they did to kid themselves.”

Although the Obama administration attempted to resolve the Iranian regime’s behavior through rapprochement, the Trump administration has taken a different route.

“I can say that we have a president of the United States who is completely and totally opposed to the regime in Tehran,” Bolton said in his speech, to which Gingrich added, “I think it’s fair to say that the Trump administration has much fewer illusions about the nature of the Iranian dictatorship.”

As U.S. policy toward Iran is being reviewed, apparently the idea of supporting regime change is gaining traction among members of Trump’s cabinet, members of Congress, and politicians and experts close to the administration. “The behavior and the objectives of the regime are not going to change and therefore the only solution is to change the regime itself,” said Bolton, and Gingrich echoed this sentiment.

Mrs. Rajavi talked about how change might be effected, “Despite the regime’s deafening propaganda, the greatest threat to the regime is not a foreign enemy, but the very revolts in society, waiting to erupt,” she said.

In reference to the NCRI, the opposition coalition led by Mrs. Rajavi, former New York Mayor Rudy Giuliani said at the event, “In this case there is something different. We have an alternative.”

The NCRI was founded in 1981.  The organization strives for the establishment of a secular and democratic government in Iran. Since 2002, the NCRI has played a pivotal role in exposing Iran’s illicit nuclear program.

In the weeks that led to the gathering, activists and political prisoners inside Iran took on the perils to express their support for the NCRI and the event. “The next time there’s popular dissent, it will be across the whole country, it will be organized. The Trump administration needs to be prepared and leaning forward and ready to do everything it can to help freedom win and dictatorship lose in the great struggle that is underway in Iran,” stated Gingrich.