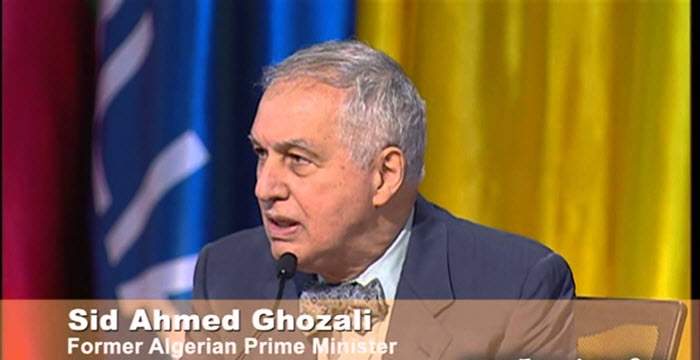 The former Algerian Prime Minister, Sid Ahmed Gozali, said that Iran seeks to destabilise the Middle East in an attempt to dominate the region and expand its power.

He said this during an interview with Globalo at the Free Iran rally organised by the opposition group, the People’s Mojahedin Organization of Iran (PMOI/MEK) in July.

He discussed with them the future of the Middle East, how to end terrorism through democracy, and Iran’s role in both.

Gozali, who also served as the minister of Foreign Affairs for Algeria from 1989-1991, said that he had seen many Iranian governments through the years and that Algeria had to cut off diplomatic ties with Iran in 1992 after Iran made continual attempts to destabilise the newly democratic country.

Gozali said: “With Iran, and every dictatorship, there is a tendency to expand and to dominate…their strategy is to destabilize and overcome other countries. Look at the destabilization they have done in Iraq, Syria, Lebanon, Yemen, and elsewhere. The target is not only the region; it is the entire Arab and Muslim world.”

He pointed out that Iran is doing the same things to middle-eastern countries today that it did to Algeria in the 1990s.

He said: “It is impossible to have peace in Iraq, [because of Iran’s meddling and prevention of] negotiation…You’ve never had peace in Syria and Iraq since the Iranian regime has been in place. It’s the cruellest religious dictatorship in the modern world.”

He said that the solution to terrorism lies in making governments more effective and minimising the space between the public and the government.

Also in attendance at the rally were bi-partisan US politicians like John Bolton, Howard Dean, and Newt Gingrich, European politicians from all points of the spectrum and Syrian rebel leaders.