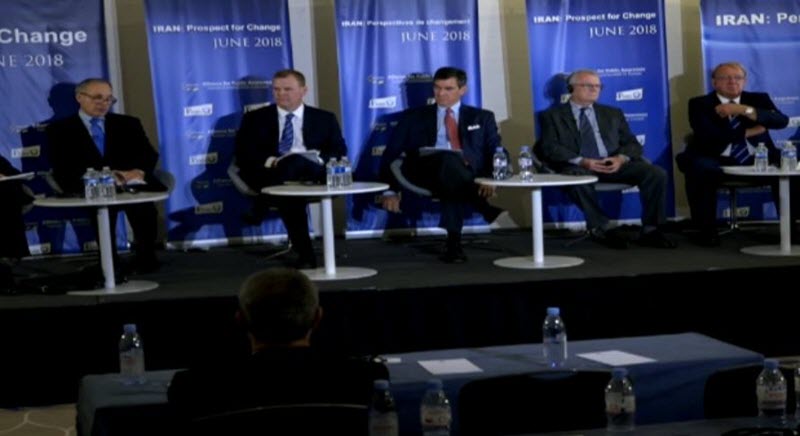 by Navid  Felker
In the final panel discussion of the day, Mitchell Reiss, former Director of U.S. State Department Policy Planning and Special Envoy to the Northern Ireland Peace Process, moderated a discussion on the protests in Iran and the Iranian opposition movement.

In his opening address, Reiss praised the decision from US and European governments to remove the People’s Mujahedin Organisation of Iran (MEK) from international terrorism lists. He described how it struck a blow to the mullahs in Iran and boosted the MEK’s notoriety around the globe.
He reminisced, “ten years ago, Maryam Rajavi (President-elect of the National Council of Resistance of Iran and leader of the MEK) was largely unknown in the US, Europe and the world. Today, she is widely respected as the determined and principal inspiration behind leading the democratic opposition movement.”
He went on to say that he “cannot wait for her to visit the United States and outline her vision for a new Iran”, amid an explosion of applause from the audience in attendance.
A momentum shift for Iran’s opposition

The rise in fame of Maryam Rajavi has coincided with a marked momentum shift in Iran. The MEK and NCRI enjoy unprecedented levels of support within Iran. Michael Mukasey, former US Attorney General, described how recent protests mark a new era for the Iranian opposition. While the MEK and NCRI have previously enjoyed the support of academics, students, and expatriates, recent protests in Tehran show that other demographics are now supporting the Iranian opposition.

The strikes that rocked Tehran’s Grand Bazaar this week included shopkeepers and merchants, a group Mukasey described as “the backbone and spine of the Iranian economy.”
The new form of protests in Iran are not confined to Tehran either. Rural provinces are rising up against their oppressors, which Mukasey called, “an enormously hopeful sign”.
Outside of Iran, there has been a shift as well. Nike withdrew its supply of football boots to the Iranian national team at the world cup. US sanctions are already working. Companies will not risk losing their business in the US by dealing with the Iranian markets.
Struan Stevenson, former President of the European Parliament’s Delegation for Relations with Iraq, eloquently described the situation for European companies. He said for “every dollar European companies make in Iran, they lose $1,000 in the US.”
Yves Bonnet, Head of France’s National Security Service, applauded the fact that there is now a President in the White House that understands the situation in Iran, even though he is derided by the French press. Louis Freeh, former Director of the FBI, encouraged the Iranian opposition and the MEK to “push forward with confidence” and capitalise on the shift in momentum.
Maryam Rajavi
The panel was unambiguous when it came to awarding credit to the person responsible for driving the Iranian opposition movement forward. Reiss placed the credit squarely on the shoulders of Maryam Rajavi, praising her tireless efforts in exposing the mullahs’ crimes at every turn.
However, Reiss also had a warning for the MEK and NCRI’s charismatic leader. He cautioned the Iranian opposition that with its newfound notoriety, it would now face unprecedented levels of scrutiny. He prophesized that the regime would take every opportunity to diminish Rajavi and the opposition, and publicly “distort” their words.
But he was quick to add that the movement also had new friends at home and abroad. These friends would help Maryam Rajavi and her followers realise their dream of establishing a democratic Iran and catapult it among the world’s leading nations. Referring to the line often touted by the regime, John Baird, former Foreign Minister of Canada, joked, “if Maryam Rajavi is the leader of a cult, sign me up” prompting laughter and applause from those in the audience.
An eruption of volcanic proportions
One of the highlights of the discussion came from Struan Stevenson’s comparison of Iran to the volcano in Hawaii. He cited the recent protests among Iran’s youth as evidence that there would soon be “an eruption of volcanic proportions that will sweep away” the regime.
The public has had enough. Struan Stevenson drew attention to recent slogans used by the Iranian opposition in their protests as evidence. “Death to Rouhani” and “death to Hezbollah” indicate that the Iranian public will not tolerate their national finances being spent on bloody foreign conflicts.
In a moment of passion, Stevenson told the audience, “Rouhani is an evil monster like all the other mullahs”.

The MEK are making a difference

Stevenson also acknowledged the impact the MEK and the opposition movement was having. In days gone by, the mullahs would dismiss the MEK as an “irrelevant” organisation. Now, they blame the MEK for uprisings and protests across Iran. Stevenson pointed to this as evidence of the positive impact the MEK is having. “They [the mullahs] fear democracy. They fear justice. They fear freedom,” he said, amid bursts of applause.

But the MEK cannot do it alone
The panel reiterated the need for international support to help the MEK and the opposition overthrow the tyrannical regime. Stevenson said the people of Iran and Europe expect more from their leaders.
Sid Ahmed Ghozali, former Prime Minister of Algeria, described the Iranian cause as being important to citizens around the world. But said that in not taking a firmer stance against the clerical regime in Iran, Western powers were committing “tragic errors”.
He demonstrated the folly in European beliefs that moderates within Rouhani’s regime would prevail, stating “this regime cannot be moderate”. Rouhani’s regime has killed innocent civilians, including 120,000 members of the MEK. It cannot be moderate.
It cannot even be called Islamic. Ghozali described how the Qur’an calls on Muslims to “detest extremes”, of which Rouhani and his merciless regime most certainly are.
In the face of such ruthless barbarism, “now is the time to act and act boldly”, urged Freeh. The opposition is gaining momentum, now is the time to push forward.