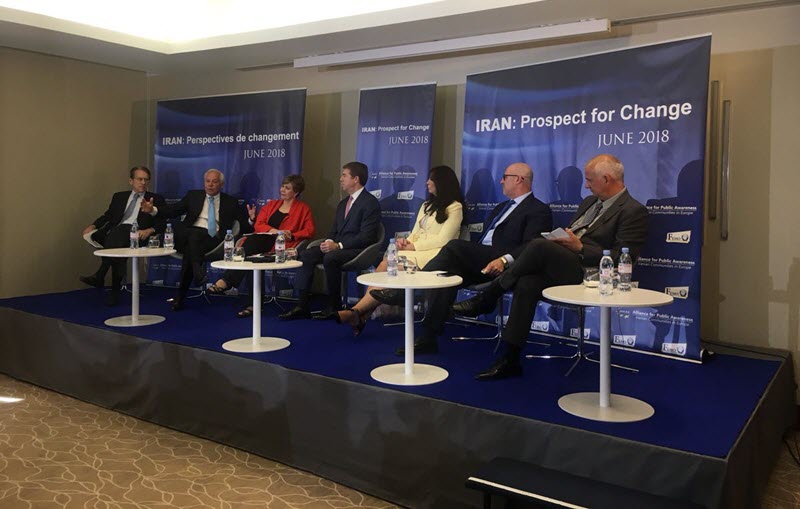 by Staff writer, SF
On Friday, June 29th, an editorial was published in the Washington Times focusing on the panel discussions that were held as part of the Free Iran event held by the National Council of Resistance of Iran (NCRI), of which the MEK is the largest member, this weekend in Paris. The panel discussions were held on Friday, a day before the main gathering, and featured small groups of high-level policy experts of different political backgrounds and nationalities discussing issues relating to the Iranian regime and the opposition movement.

A common theme that emerged in each of the four panels was the perception that the Iranian regime’s corruption extends to officials in the European Union and that the policy of absolute appeasement toward the mullahs derives from European capitals.

Russia is often the focus of the world’s ire. Its use of propaganda and interference in elections makes its bad reputation well-founded. But the Iranian regime uses propaganda extensively. They are arguably a bigger problem than Russia because they are much better at concealing their deceit and disinformation. The MEK has long been the target of the mullahs’ disinformation, as was discussed in the panels.

Former U.S. Senator Robert Torricelli, a New Jersey Democrat, defended Donald Trump’s withdrawal of the United States from the JCPOA, saying that though he was no fan of Trump, the Iranian regime needed to be prevented from building a nuclear program and violating human rights and the JCPOA was not an effective way to achieve those ends.

Former Italian foreign minister Guilio Terzi pointed out that the withdrawal by the United States put the rest of Europe in the uncomfortable position of having to justify their dealing with the mullahs. U.S. sanctions will also affect European businesses who do business with Tehran, which has forced Europe to take a second look at its own policies toward the regime. The cost of doing business with Tehran is no longer only a moral one. The cost is now financial as well, and many countries who were willing to deal with the moral costs to appeasement are not at all amenable to the loss of profit.

Anyone familiar with Middle Eastern policy will find the information so far to be old news. Appeasement toward the mullahs has been the policy of the West for almost 40 years, and it’s not a secret. The MEK has fought a number of court battles to clear its name from the regime’s smear campaigns, and some of these appeasement policies have become part of the court records in these cases.

However, there was a shocking allegation made by former U.S. ambassador to Bahrain Adam Ereli during the panel discussions. Ereli alleged that the current European Union ambassador to Iraq, Ramon Blecua, is a bought-and-paid-for Iranian intelligence agent.

Ereli claimed that Blecua bought a $12-million villa in Europe and paid another $2 million in renovations, without any financial means to do so. Ereli further alleged that European official Federica Mogherini selected Blecua over five other highly-qualified candidates, despite the fact that Blecua was not endorsed by his native Spanish government.

Ereli’s allegations are salacious but as yet unsubstantiated. The panel discussions made clear that appeasement is a well-documented policy that has occurred on the record for almost forty years in official dealings between governments. Juicy pieces of gossip aside, appeasement is real, and it perpetuates human rights crimes.