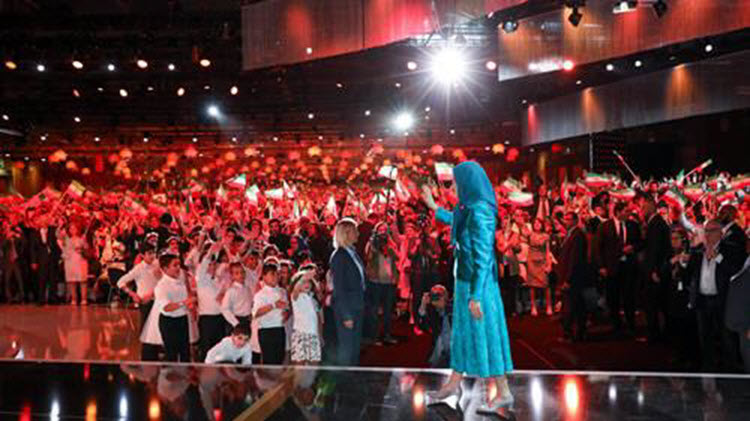 On, July 1st, a massive gathering of tens of thousands of members of the Iranian Diaspora joined hundreds of dignitaries from the Arab World, the United States and Europe and their supporters in a convention hall north of Paris, where at least 100,000 people voiced their demands for regime change in Tehran. The event, staged annually by opposition coalition National Council of Resistance of Iran (NCRI), was led by its President, Maryam Rajavi. People came together to unite against the regime in Iran. It was the largest gathering of Iranians abroad of its kind.

The event was organized by the National Council of Resistance of Iran (NCRI), and it highlighted human rights, peace, women’s rights, freedom, democracy, and to demand victory over terrorism. It focused on generating awareness for Iran’s innocent and vulnerable citizens.

Ambassador Bolton pointed out, “We come at a time of really extraordinary events in the United States that the distinguish today from the circumstances one year ago. Contrary to what virtually every political commentator said, contrary to what almost every public opinion poll said, contrary to what many people said around the world, Barack Obama’s first Secretary of State Hillary Clinton is not the president of the United States. So for the first time in at least eight years that I’ve been coming to this event, I can say that we have a president of the United States who is completely and totally opposed to the regime in Tehran… he completely opposes the Iran nuclear deal signed by his predecessor.”

Bolton also stated, “The fact is that the Tehran regime is the central problem in the Middle East. There’s no fundamental difference between the Ayatollah Khamenei and President Rouhani — they’re two sides of the same coin. I remember when Rouhani was the regime’s chief nuclear negotiator — you couldn’t trust him then; you can’t trust him today. And it’s clear that the regime’s behavior is only getting worse: Their continued violations of the agreement, their work with North Korea on nuclear weapons and ballistic missiles, only continues to grow.” He added, “And let’s be clear: Even if somebody were to say to you that the regime is in full compliance with the nuclear deal, it doesn’t make any difference. North Korea is already perilously close to the point where they can miniaturize a nuclear weapon, put it on an intercontinental ballistic missile, and hit targets in the United States. And the day after North Korea has that capability, the regime in Tehran will have it as well, simply by signing a check…. that’s why Donald Trump’s views on North Korea are so similar to his views on the regime in Tehran.”

As Ambassador Bolton made clear.”…we must avoid allowing the regime in Tehran to achieve its long-sought objective of an arc of control from Iran, through the Baghdad government in Iraq, the Assad regime in Syria, and the Hezbollah terrorists in Lebanon — an arc of control, which if it’s allowed to form, will simply be the foundation for the next grave conflict in the Middle East.

“The regime in Tehran is not merely a nuclear-weapons threat; it’s not merely a terrorist threat; it is a conventional threat to everybody in the region who simply seeks to live in peace and security.

“The regime has failed internationally. It has failed domestically, in economics and politics — indeed its time of weakening is only accelerating, and that’s why the changed circumstances in the United States, I think, throughout Europe and here today, are so important.

“There is a viable opposition to the rule of the ayatollahs, and that opposition is centered in this room today.”

Former House Speaker Newt Gingrich praised the Iranian opposition as a just and pure movement, “I am very impressed by the dedication of your movement”. He continued, “I come today to bring a very simple message: Iran must be free”. He praised the leadership of Maryam Rajavi, the President-elect of the National Council of Resistance of Iran (NCRI), saying, “She is persistent in difficult times. She is a great leader. I thank each of you on her behalf to help her make her a truly historic figure.”

Maryam Rajavi struck a hopeful note for democratic change by saying, “The ruling regime is in disarray and paralyzed as never before. Iranian society is simmering with discontent and the international community is finally getting closer to the reality that appeasing the ruling theocracy is misguided…. Our people want a constitution based on freedom, democracy, and equality…. The sun of change is shining on Iran.”

Rajavi added that the international community must “recognize the resistance of the Iranian people to overthrow the mullahs’ religious dictatorship and designate the Islamic Revolutionary Guards Corps as a terrorist organization and evict it from the entire region.”