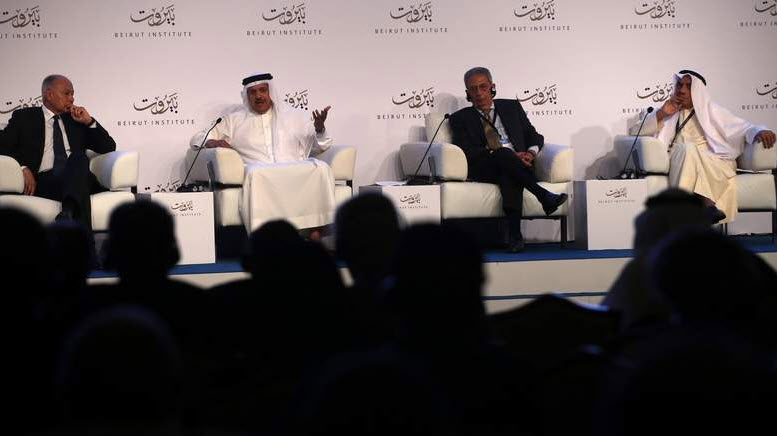 In order to deal with the Iranian threat, the Qatar conflict, and to find political solutions in Syria, Yemen and Libya, the Gulf Cooperation Council (GCC) member states and Arab countries must foster solidarity, cooperation and self-reliance among themselves, according to a general consensos among senior Arab leaders who gathered in Abu Dhabi on Saturday.

The leaders and senior policy makers were attending the Beirut Institute Summit to discuss and formulate policies for efficient Arab engagement on the global stage.

On the first day, they discussed Iranian intervention in Yemen and Syria, and its growing threat to regional peace and security. Abdullatif bin Rashid Al Zayani, Secretary General of GCC, said that US President Trump’s exit from the Iranian nuclear deal has given Iran an opportunity to change its aggressive course. “This is the chance for Iran to shift its path and disarm. Now the ball is in the Iranian court to seize the opportunity and stop meddling in regional affairs and stop the supply of ballistic missiles to terrorists,” said Al Zayani. He also called the recent missile attacks on Saudi Arabia a “serious matter”. Zayani pointed out that the GCC countries have clearly voiced their demands. “The international community should support the Arab League and GCC in disarming Iran and establishing peace and security.”

Former Secretary General of the League of Arab States, Amre Moussa, said that while Iran’s nuclear ambition should be kept in check, the same is binding on Israel as well. “We do not want nuclear weapons in the Middle East, whether it is Iran or Israel.”

In response to a question regarding Iran’s involvement in the Yemen war, former Secretary General of the GCC, Ambasador Abdullah Bishara said international pressure is crucial to subjugate Iran. “The facts on the ground are against Iran. If there is joint pressure from the European Union, Security Council, Arab states and the international community, Iran will give in. We need both soft diplomacy and strong diplomacy with Iran.” Referring to the Qatar crisis, and whether it has destabilised the GCC, Zayani said, “Currently, the conflict is clear and evident. We are putting our efforts in ensuring our collaboration is not affected by the conflict. There are serious efforts to resolve the crisis.” He also discussed Kuwait’s mediating role in the regional crisis, following the Arab states cutting diplomatic ties with Qatar.

Secretary General of the Arab League, Ahmed Aboul Gheit, said he did see an end to the Syrian war in the near future. “The situation in Syria is very complex, with many external forces at play. I think the Arab League should have mobilised all its political channels and tackled the issue before it spiralled out of control. But we relegated the issue to the UN.” He added that though the Arab League has all the mechanisms in place to deal with peace initiatives, funding is an impediment. “The entire contributions of the member states to our budget is merely $60 million. That is a big problem.”