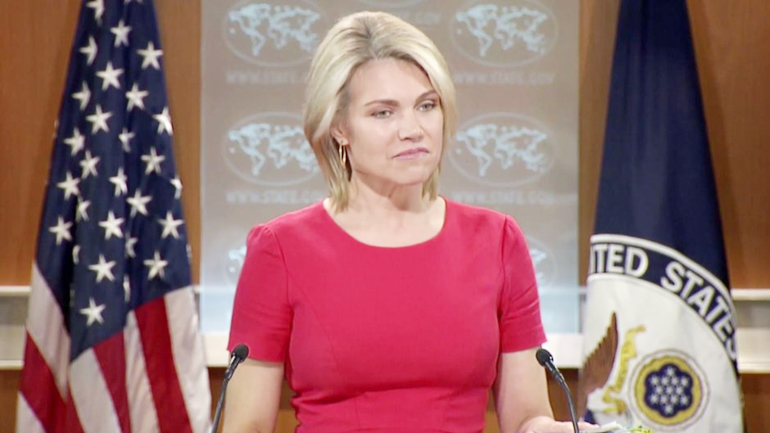 by Armin Baldwin
In response to a question about the U.S. role in Iraq’s reconstruction at the State Department press briefing on Thursday, cautioned against Iran’s participation in the rebuilding of Iraq, warning that “where Iran goes, trouble tends to follow.”

When asked about the ways that the U.S. would be contributing to reconstruction in Iraq, Nauert explained that the U.S. is not going to focus on large-scale projects; instead, it will work on getting neighboring countries involved in the process.
She said that “during the Bush administration and other administrations we would do these large-scale projects of building roads and building tunnels and bridges and all of that to provide that for communities in Iraq and Afghanistan.

That’s not what we’re doing today. We are helping with reconstruction certainly, but this administration believes that a better approach to that, instead of spending trillions and trillions of dollars on that restructure or on that rebuilding, is to get other countries, the neighboring countries, involved as well.”

She added, “So the United States is certainly involved. The United States participated in the Kuwaiti conference where some countries ended up providing donations, loans, things of that nature, and we were certainly happy to have seen that happen. The United States’ priority though now is stabilization and providing some of the basics.
But we think it’s a wonderful thing when other countries in the region will step up to the plate. The Saudis talked about this, for example.

The Turks – I believe they gave – they offered up some money. But I recall the Saudis, I mean, saying you know what, we’re interested in this, we’re interested in helping out our neighbors and seeing what we can do about reconstruction. And there were more than 2,000 people or companies who were involved in that Kuwait conference.”

The reporter then noted that Iran’s deputy foreign minister said the Islamic Republic will contribute to Iraq’s reconstruction and asked for Nauert’s reaction.

Nauert clarified that she was referring to trouble coming from the Iranian regime, not the Iranian people. “There can also be very strict regulations when you work with a nation like that,” Nauert said. “You may not be, as a country, getting all that you bargained for. It may be a lot more difficult and a lot more onerous than you think, so you’re certainly entitled to do that but I would probably caution countries.”