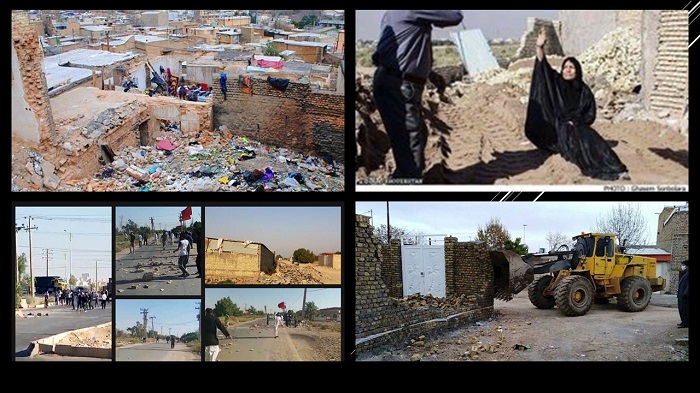 In 1979, Iranian regime founder Ruhollah Khomeini claimed that impoverished people would have homes provided for them by the mullahs, but 41 years on, not only have the people not received any new homes, but many have seen their existing ones destroyed by the mullahs.

Worse still, the regime’s dire economic mismanagement has damaged the country’s finances, increased the number of people living in poverty, and pushed citizens into renting, rather than buying, while some have even been squeezed out of the rental market and are forced to live in places like caves and graveyards.

Dr. Mahboubfar, a member of the National #COVID19 task force,said in late April that “the current numbers are twenty times what is being announced by the Health Ministry.#MEK https://t.co/T9h2j6PyeZ via @stopfundamentalism #Iran #FreeIran2020 pic.twitter.com/mVQ16YEEvQ

Regime expert Mohammad Reza Mahboubfar admitted on May 23 that there was an over 50% increase in the homeless’ population between 2018 (est. 19 million) and 2020 (est. 38 million). This is despite the fact that the Javan daily reported that there are more empty homes than there are homeless families. The solution seems obvious but then how would the regime make its money?

Of course, the regime doesn’t care about the people or their problems. In fact, the regime very much built its system on stealing the people’s money and the country’s national resources. One might say this is proof that the regime’s policies are working exactly as designed.

The Mostazafan Foundation, which is one of the richest construction companies in Iran and supposed to be benefitting the poor, has been involved in multiple housing projects over the years, but none have really helped the people. In fact, the Mostazafan Foundation recently forced hundreds of villagers out of their homes – built by the villagers – because they claimed to own the land.

Abolfazl village in Ahvaz was frequently raided by state security forces in late August, with the intention of confiscating or destroying the houses of locals.

Of course, the land is owned by the villagers. The homes had stood for decades – much longer than the foundation has been in operation – and the foundation only took an interest when land prices soared. But still, those who protested were beaten and arrested by the regime’s security forces for attempting to protest the destruction of their property.

One local said: “During the monarchial era, officials failed to provide documents to our ancestors and claimed: ‘Arabs have no right and they can merely farm and eat in this area.’ Now, the Mostazafan Foundation does what the Shah’s SAVAK [intelligence service] did in dealing with our ancestors.”

Mrs. Maryam Rajavi the President-elect of the National Council of Resistance of Iran’s (NCRI): I urge the brave people and youth of Ahvaz to rush to the aid of the residents of Abolfazl district. They have committed no crime but defending their lives and homes against the mullahs’ corrupt Mostazafan foundation.

I urge the brave people and youth of #Ahvaz to rush to the aid of the residents of Abolfazl district. They have committed no crime but defending their lives and homes against the mullahs’ corrupt Mostazafan foundation. https://t.co/aK50yLQ9Dj pic.twitter.com/0Mo3MC8dWg

The Iranian uprising will certainly lead to the overthrow of the mullahs Regime, especially with the help of the People’s Mojahedin Organization of Iran (PMOI / MEK Iran) and MEK resistance units within Iran, who have been so instrumental in the organizing the protests and breaking the Regime’s atmosphere of fear.

Iranian officials, including Supreme Leader Ali Khamenei, have repeatedly admitted that the MEK is responsible for the protests and expressed fear that this could well mean the end of the Regime.