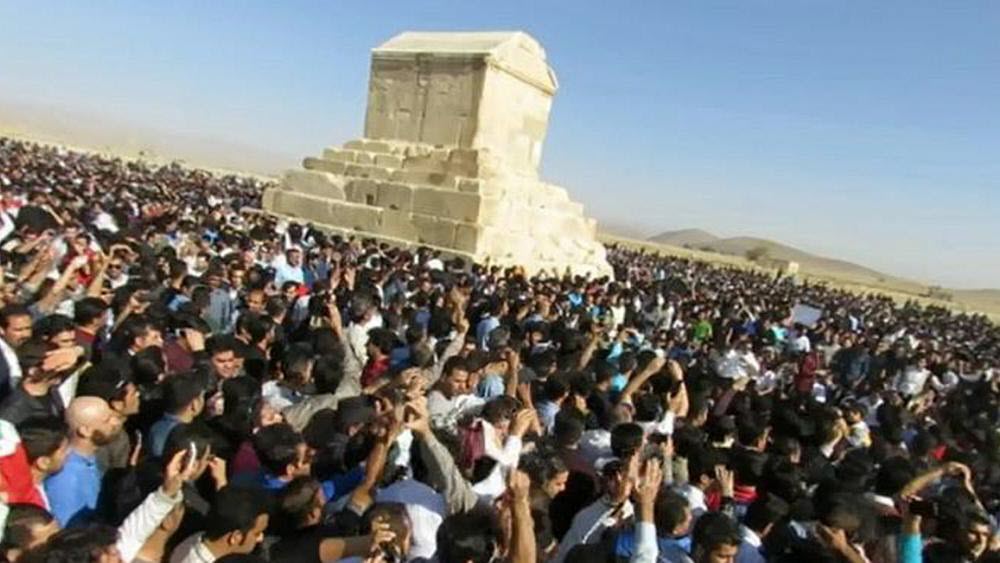 Last year on October28th, thousands of Iranians went to Pasargadae to pay tribute to Cyrus the Great and many ended up protesting against the Iranian regime. Security forces were deployed and several people were arrested. The crowd chanted: “Iran is our homeland; Cyrus is our father”, “Freedom of thought cannot take place with beards” in reference to the current leaders of the country, and “Clerical rule is synonymous with only tyranny, only war”.

Once the gathering ended, the Prosecutor General announced that the “main leaders and organisers” of the event had been arrested. There were also other officials who denounced the Pasargadae gathering.

Ayatollah Hossein Nouri Hamadani claimed that Ayatollah Ruhollah Khomeini, the founder of the Islamic Republic, had once said that “those who remembered Cyrus were anti-revolution”. Hamadani was quoted in the press saying that those who attended the gathering last year are against the revolution and expressed incomprehension as to how they can chant to Cyrus what they chant to the Supreme Leader.

There have been reports circulating about the possibility of the mausoleum being completely shut off to the public this year between 27th and 30th October for fear of a similar protest happening. However, the CHO (Cultural Heritage Organisation) in the Fars province has said that there is no truth to these claims.

Fatemeh Rezaei said: “CHO and the Fars governor-general have not yet decided on Cyrus the Great’s International Day or celebrating it at Pasargadae on October 28. Statements recently circulated with the governor-general and CHO logos are fake and invalid.”

Rezaei insisted that a decision about keeping the memorial open on the International Day of Cyrus the Great has not been decided.

The supposed official statement has been circulated extensively on social media with official logos of the organisation and said that people would be banned from participating in the annual ceremony. It said that “anti-revolution groups” would be stopped from “abusing” the day for their “political ends”, so therefore “the Pasargadae touristic complex will be shut down from October 27 to October 30”. It added: “All roads leading to the complex will be blocked by the authorities.”

Although the veracity of the statement has not been confirmed, this is exactly the type of action that the Iranian authorities take to control the public and to prevent protests and demonstrations.
The Supreme Leader of Iran is wholeheartedly against the celebration of any event that is not Islamic, in particular anything from pre-Islamic Iran.

Not all officials are of the same notion. For example, the Culture and Islamic guidance minister urged the country’s decision makers to celebrate the day and to hold an official ceremony.