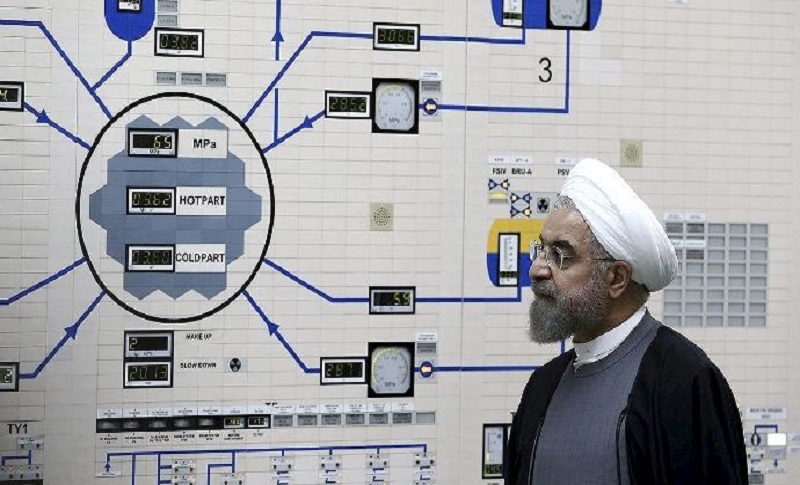 The Iranian regime, over the past few months, has been carrying out breaches of the Joint Comprehensive Plan of Action (JCPOA) despite pleas from the European signatories (France, Germany and the United Kingdom) for it to reverse its actions.

Earlier this week, the Iranian regime acted again in yet another breach of the nuclear agreement. The head of Iran’s Atomic Energy Organization Ali Akbar Salehi told state media on Monday 4th November that the regime had put more advanced centrifuges into use. He said an additional 30 had been commissioned.

The following day, the regime’s President Hassan Rouhani said that the country would commence putting uranium gas into centrifuges. He said that the gas would be injected into more than one thousand centrifuges and he said that this would be taking place at a fortified nuclear site that has been built into a mountain. This site is known as Fordow.

Rouhani described this as the regime’s fourth step but also indicated that it was reversible. Rouhani, in what seemed to be a contradiction to the words of the country’s Supreme Leader, said that the regime is ready to negotiate. He plans to use the negotiations to receive more incentive packages and commit to nothing.

Only a few days before Rouhani’s words were spoken, the regime’s Supreme Leader –Ali Khamenei – said that the country will not enter any negotiations because it will not help the regime. He admitted that entering into negotiations would mean that the ballistic missile program would need to be addressed, saying that this would be a “serious blow”.

Iran’s regime is trying to threaten the international community, in particular, European governments, into giving Iran concessions. In the past, this is a strategy that has worked very successfully for the regime. During the previous US administration under former President Obama, the Iranian regime was able to act as it pleased, certain that the US would not bat an eyelid or utter a single word about its belligerence.

The regime enjoyed this for quite some time, but the situation is changing. The current US administration has taken a tough stance on Iran and has encouraged European governments to do the same. The appeasement policies of the EU are starting to get tighter, and quite rightly so because Iran’s belligerence has been escalating.

Only a few months ago, Iran was seizing foreign vessels and it was responsible for the attacks on a Saudi oil installation. All governments dealing with this regime have a responsibility to ensure that its belligerence is addressed. All governments, especially the European ones, should prioritize values that they uphold – freedom, human rights, and democracy. They should also realize that these are the values that the people of Iran have been calling for in their anti-government demonstrations.