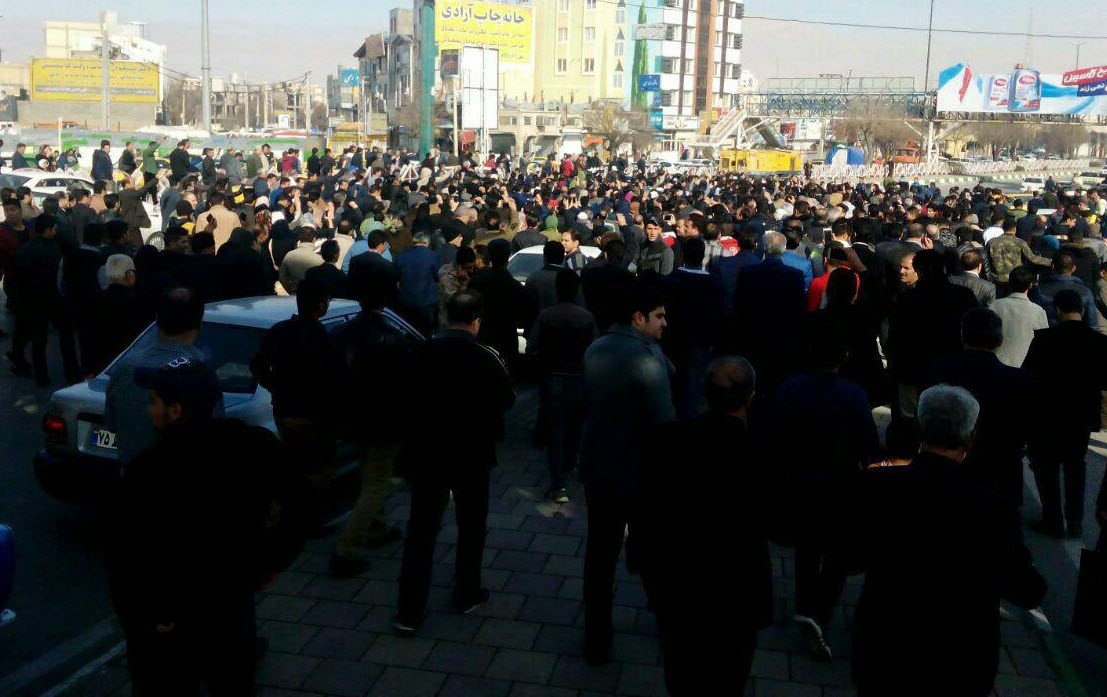 Iranians took to the streets in several cities across their country for a second day on Friday to protest rising prices and corruption as well as the regime’s support for Syrian dictator Bashar al-Assad.

The largest protest on Friday was held in the western city of Kermanshah. Similar protests were held in a number of cities including the southern city of Shiraz, the northern city of Rasht.

The protests were held despite heavy presence of repressive State Security Forces and warnings from the regime against ‘illegal gatherings.’

The protests started with anger of the protesters over rising cost of food and basic necessities but soon it developed into anti-government rallies.

On Thursday a large number of protesters took to the streets in the cities of Mashhad, Neyshabur, Kashmar and Birjand in northeast Iran, protesting unemployment, poverty and skyrocketing prices. Protesters were also seen chanting, “Death to Rouhani” and “Death to the Dictator,” in reference to the regime’s president and Supreme Leader Ali Khamenei, respectively.

In solidarity with the people of Mashhad uprising, residents of Kermanshah in western Iran on Friday rushed to the streets and chanted slogans “death to the dictator”, “do not be afraid, do not be afraid, we are all together”, “Death to Rouhani”, “political prisoners should be freed”.

Protesters chanted, “The nation is poor, the Leader is like God”, “Neither Gaza, Nor Lebanon, My Life For Iran”, “Bread; Job; Freedom”, “No to High Prices”.

The clerical regime, in fear of the continuation of the Mashhad uprising, sent a message to all security forces, in which they wrote: “Urgent – Red situation – All forces to present themselves in the field!!!”

A worker said: “I’ve been working for 27 years. I was fired by Mr. Rouhani, with a million tomans per month ($230 per month), I have seven children, I’ve worked hard for 27 years, now they fired me. People chanted: “Death to high prices!”.

A young man said I’m tired of unemployment and lack of income.

Iranians in Germany held protest rally supporting their countrymen’s anti-regime protest. Iranians in Berlin held a protest outside the Iranian regime’s embassy in that city. Similar protests were held in Koln and Hamburg.

Mrs. Maryam Rajavi, President-elect of the Iranian Resistance, saluted the heroic people of Kermanshah and other cities who rose up today chanting “death or freedom”, “death to Rouhani”, “death to the dictator”, and “political prisoners must be freed”, and protested against high prices, poverty and corruption.

She said, “Yesterday Mashhad, today Kermanshah, and tomorrow throughout Iran; this uprising is the death knell for the overthrow of the totally corrupt dictatorship of the mullahs, and is the rise of democracy, justice and popular sovereignty.

Mrs. Rajavi called on all the people, especially the youth and women throughout the country, to join the “No to High Prices” uprising, saying that “the corrupt dictatorship of the mullahs will undoubtedly fail against your national unity and solidarity, resistance and continuity of your rightful uprisings.”

She added that the record of the mullahs’ rule for the past four decades has been nothing but inflation, poverty and corruption, torture and execution, killings and aggression. The bulk of the people’s wealth, including the money released in the nuclear deal, is either spent on repression and export of terrorism and war, or is plundered by the regime’s leaders. The overthrow of the religious fascism is the first step to get out of the crisis that is intensifying every day.

She said that the mullahs’ regime has no future; investment on it is doomed to failure, and it is time for the international community to not tie their fate to this regime and recognize the Iranian people’s Resistance to overthrow that regime.