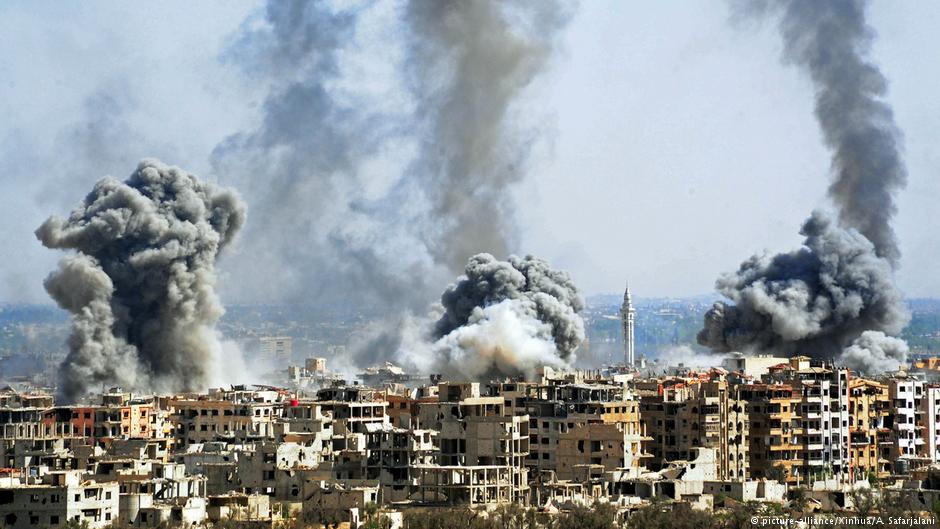 by Armin Baldwin
The Syrian Regime and its allies killed at least 70 civilians and injured thousands more in yet another chemical attack on the Syrian people, this time targeting Douma, Eastern Ghouta.
Simply, this evil regime and those who support it (i.e. Iran) are determined to wipe out the opposition, no matter who they kill in the meantime. They don’t care about a just war or international norms of warfare, they believe that the safety of civilians is nothing compared with political advantage.

One of the worst things about this is that the Bashar Assad Regime would have been defeated years ago if the Iranian Regime hadn’t spent $20 billion to prop up its fellow dictatorship. The Iranian Regime sent many terrorist militias into Syria, ostensibly to guard sacred shrines or fight ISIS, but their real task was to crush the Syrian opposition by any means necessary.

This is something that Iran is consistent with, no matter what Middle Eastern conflict they have inserted themselves into.
Abdel Aziz Aluwaisheg wrote on Arab News: “The persistent use of chemical weapons and ballistic missiles by Iran’s allies — there have been hundreds of them since 2012 — speaks volumes about Iran’s real intentions in the region. So do the activities of terrorist groups trained, funded and supplied by Iran. These actions speak louder than the carefully scripted speeches and Op-Ed essays of Iran’s diplomats, directed at Western audiences. Other Iranian politicians and Islamic Revolutionary Guard Corps leaders are usually all brass knuckles. Chest-thumping and bellicose, those leaders do not hide their delusional ambitions to control the region, by whatever means necessary.”

This is true. Iranian Foreign Minister Mohammed Javad Zarif recently wrote an op-ed about peace and security in the Middle East, but could not say how Iran could achieve that. He also didn’t mention how Iran is responsible for most of the conflict in the region through its support of terrorist militias and its interference in the affairs of nation states.

There is a massive contrast between Iran’s words and its deeds in the Middle East, which is why many regional observers do not trust Iran to bring peace. In 2016, the Gulf Cooperation Council proposed that if Iran wanted to work with with the rest of the region, that it would need to first commit to three basic principles of international law:
1.publicly commit to the UN Charter’s provisions on state sovereignty
2.refrain from inciting or exploiting sectarian differences
3.refrain from interfering or trying to export their own political systems to their neighbours
This shouldn’t have been a hard thing for Iran to do, but they have not even responded to the GCC
Of course, after almost 40 years of this regime, the rest of the world shouldn’t expect that any sort of internal reform is possible. In fact, the only hope for peace in the Middle East is if the Iranian people can impose regime change and remove their rulers from power.