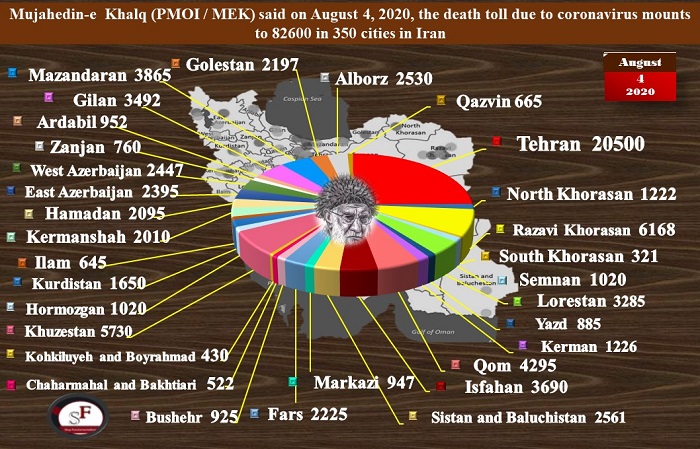 The Coronavirus outbreak in Iran continues to claim many lives every single day. The death toll has now exceeded 82,600. More than 350 cities across the country have been battling with the outbreak and not a single province has been spared.

The (PMOI / MEK Iran), the main opposition to the Iranian regime, tasked itself with reporting accurately on the health crisis before it even started, very concerned that the regime would hide the extent of the outbreak. Unfortunately, the (PMOI / MEK Iran) was correct and the regime has lied, deceived, and covered up everything pertinent to the health crisis, including the statistics.

Iran: Coronavirus Death Toll in 350 Cities Exceeds 82,600
The People’s Mojahedin Organization of Iran (PMOI/#MEK) announced on Tuesday, August 4, 2020, that the number of #Coronavirus fatalities in 350 cities across #Iran had passed 82,600. #COVID19https://t.co/1pwboRmzSP

These lies and deceptions have resulted in tens of thousands of people needlessly dying and left millions upon millions of people vulnerable.

Officials refuse to take responsibility for the devastation that the virus has brought to the country. Saeid Namaki, the country’s Minister of Health, spoke at the regime’s parliament a few days ago. He tried to shirk responsibility and said that he had warned the Supreme Leader that the situation was going to get worse.

The Health Minister also warned that it is looking very likely that the influenza season is going to make the situation even worse. This is very worrying because the hospitals and medical centers are already struggling with the number of sick people needing treatment.

A deputy on the Coronavirus Task Force in Tehran said that all public hospitals are currently dealing with the Coronavirus response, with several private hospitals dealing only with infected patients. He said that in Tehran, 50 percent of beds in intensive care units are for COVID-19 patients.

More than 82,600 people have died of the novel #coronavirus in 350 cities checkered across all of Iran’s 31 provinces, according to the Iranian opposition PMOI/MEK.

In Shiraz, medical professionals have said that for the past three weeks there have been between 15 and 20 deaths every day because of COVID-19. However, that is only for the number of people that have been tested positive. It does not include those who were symptomatic but were not tested, so the figures rise further.

It is very clear for all to see that the Iranian regime is the biggest virus of all. It has mismanaged the coronavirus crisis from the very start and it is incompetent in every way possible.

More than 82,600 people have died of the novel #coronavirus in 350 cities checkered across all of Iran’s 31 provinces, according to the Iranian opposition PMOI/MEK.

The MEK and the Iranian Resistance has been calling for international intervention to protect the people of Iran from this regime that has no regard for their lives. It is not only prolonging the pandemic in Iran, but it is also putting neighboring counties at risk.