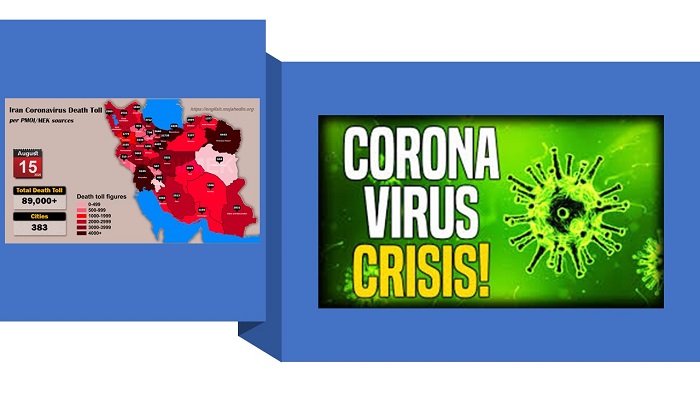 The latest COVID-19 death toll reported by the People’s Mojahedin Organization of Iran (PMOI / MEK Iran) is 89,000. Every single province has been fighting against this virus, with 379 cities across the country reporting cases.

In the provinces of Isfahan, Qazvin, West Azerbaijan, Alborz, and Yazd, more and more cities are being classed as being in a red state, according to a spokesperson for the Ministry of Health. They added that at the minute, 139 cities are red and 99 are in “alarming conditions”.

The province of Tehran is also classed as red status and there has not been a decrease in the number of people requiring hospitalization. The governor of the province said that of the 3,800 people currently in hospital in the province, 3,200 of them are in intensive care units (ICUs). He said that the conditions are not controlled in the province and that measures must be implemented to bring the situation under control, such as working from home when possible and limiting the use of large spaces where people can gather.

A member of Tehran’s city council also spoke about the situation, recalling that Tehran is a “complicated supercity” with a high level of inner provincial commuting. This, Elham Fakhari said, is why Tehran “has become the center of COVID-19”.

Several medical and scientific experts across the country have warned that several provinces are struggling to cope with the number of people needing hospitalization. Many hospitals are quite simply full and cannot take any more patients.

Speaking about the difficult circumstances that many in Iran find themselves in, the Friday prayer leader of Raz and Jarglan highlighted that some people in rural parts of the country have to travel several hours just to get a test, and then repeat the journey the following day to get the results. Then there is another long journey the next day to consult a doctor.

More than 87,900 people have died of the novel #coronavirus in 379 cities checkered across all of Iran’s 31 provinces, according to the Iranian opposition PMOI/MEK.

This is very problematic and it highlights that this may be out of reach for large parts of society, especially the very poor of which there are many across the country.

The health crisis has spiraled out of control because the regime failed to take appropriate action at the appropriate time. Furthermore, regarding the very few measures the regime put in place, they were quite simply ineffective or insufficient. The people of Iran have been left extremely vulnerable to the virus.

Medical professionals have also been left very vulnerable to contracting the virus and they have been overwhelmed by the difficult conditions that they have had to deal with. This has sadly resulted in many deaths of medical workers who have been abandoned by the leaders of their country.