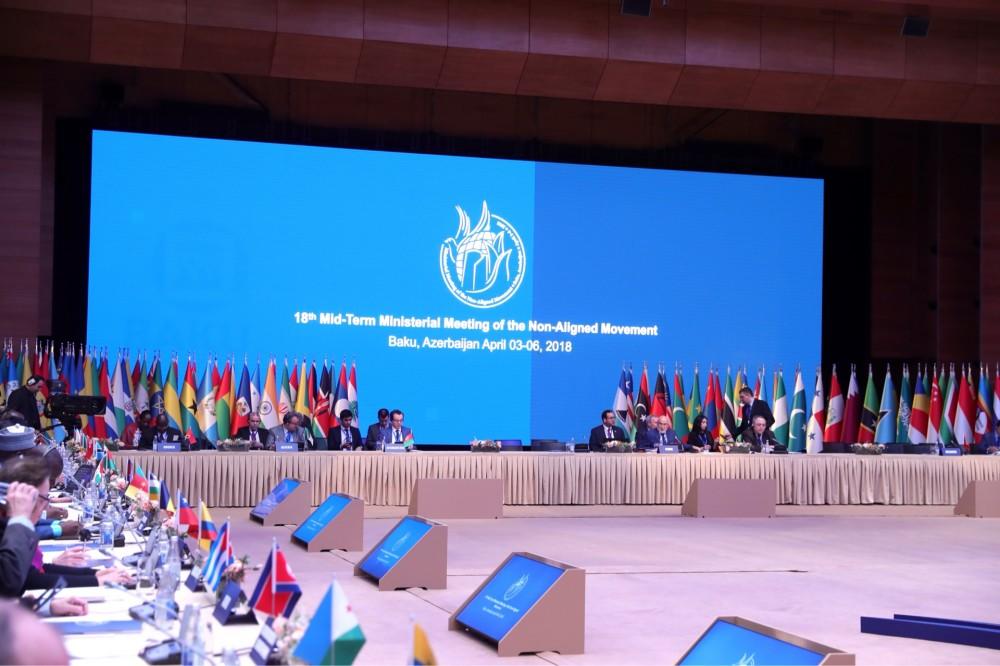 by Atousa Pilger
The Mid-Term Ministerial Conference of the Non-Aligned Movement (NAM), entitled “Promoting international peace and security for sustainable development”, kicked off in Baku, the capital and commercial hub of Azerbaijan on April 5th.
NAM participating states, representatives of observer states, and international organizations, countries and institutions invited as special guests took part in the Mid-Term Ministerial Conference, held on April 5th and 6th.

NAM includes 120 states. Seventeen states and 10 international organizations have an observer status in NAM. It was attended by some 800 participants.
In 1955 the Conference adopted a 10-point declaration on the promotion of world peace and cooperation, based on the UN Charter.

The Ten Principles are as follows:

1.Respect of fundamental human rights and of the objectives and principles of the Charter of the United Nations;
2.Respect for the sovereignty and territorial integrity of all nations;
3.Recognition of the equality among all races and of the equality among all nations, both large and small;
4.Non-intervention or non-interference into the internal affairs of another country;
5.Respect of the right of every nation to defend itself, either individually or collectively, in conformity with the Charter of the United Nations;
6.Non-use of collective defense pacts to benefit the specific interests of any of the great powers;
7.Refraining from acts or threats of aggression and use of force in against the territorial integrity or political independence of any country. Non-use of pressures by any country against other countries;
8.Settlement of all international disputes by peaceful means, such as negotiation, conciliation, arbitration or judicial settlement as well as other peaceful means of the parties’ own choice, in conformity with the Charter of the United Nations;
9.Promotion of mutual interests and cooperation;
10.Respect for justice and international obligation.

At the conference, Saudi Arabia underscored the need for the very principles of the non-alignment movement, such as ceasing all hostilities and abandoning all actions that are contrary to good neighborliness among countries. The Saudis also called for non-interference in other countries’ internal affairs.

Conflicts are becoming the rule, while stability and security are the exception. Disrespect for international law and international resolutions has led to the spread of these conflicts, according to the spokesman for Saudi Arabia. A firmer stand is needed from the international community to restore affairs to normal and overcome the current problems, they said.

The Saudi call has echos with the rest of the world, who are tired of shallow promises. “Many countries have infringed on other countries’ sovereignty in their self interests, thereby violating international conventions and norms. Some countries have even breached the rules of good neighborliness by meddling in the internal affairs of neighboring countries,” according to an article published by Al Riyadh Daily. The publication call Iran an example for such countries.

They say that in 2012, Iran hosted the non-alignment movement summit and adopted a policy of spreading peace, justice, freedom, dignity and human rights. However, it has involved itself in wars and exported its own version of an Islamic revolution.

The world is becoming aware that what matters is the practice, not the slogans. Those who violate international law must be held accountable.