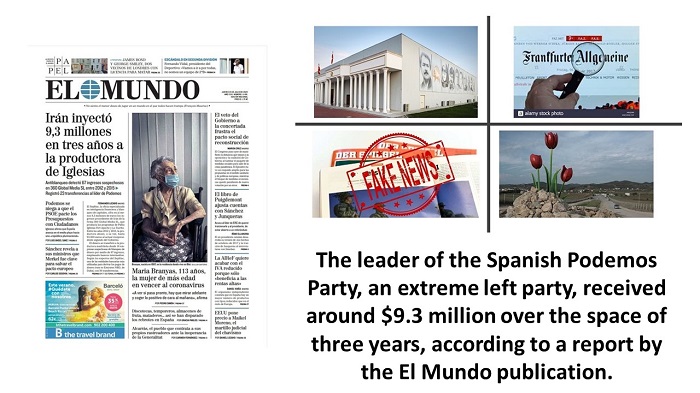 The leader of the Spanish Podemos Party, an extreme left party, received around $9.3 million over the space of three years, according to a report by the El Mundo publication. The Spanish Police’s Economic & Fiscal Crime Division (UDEF) found out that the party leader, Pablo Iglesias, used his company “360 Global Media” to take millions of dollars from the Iranian regime.

“The Economic and Fiscal Crime Division of the Spanish Police announced that a media company belonging to the leader of the anti-corruption Podemos party received more than nine million euros from Iran.” https://t.co/YUUZeL1Fxq

The media company produces programs for HispanTV – a controversial channel that is operated by an Iranian-controlled broadcaster. Because of international sanctions, it is no longer broadcast in Europe – only in Hispanic America.

The investigation uncovered that intermediary banks had been used to pass funds from more than a dozen companies suspected of money laundering to 360 Global Media.

Media manipulation is something that the Iranian regime is no stranger to. It has managed to manipulate mainstream Western media outlets into demonizing the main opposition to the Iranian regime – the People’s Mojahedin Organization of Iran (PMOI / MEK Iran).

Struan Stevenson, former Member of European Parliament and current Coordinator of the Campaign for Iran Changepoint out that the “so-called left-wing, anti-American press has been particularly susceptible to Iranian manipulation”. Mr. Stevenson emphasizes that “ludicrous” and “ill-founded” articles have appeared in publications such as the Frankfurter Allgemeine Zeitung, Der Spiegel, Channel 4 News, and even the British publications the Guardian and The Independent.

Thankfully these articles are not ignored and attention is being brought to the lies they contain. Last month, a German court ruled that journalistic standards had been violated in Frankfurter Allgemeine Zeitung’s article about the MEK, warning that it faces hefty fines and ordering it to remove online archives.

Last year, the National Council of Resistance of Iran challenged Der Spiegel on false claims it has made. It became clear during the court case that the Iranian intelligence ministry was behind this disinformation.

Last month, Albania deported an individual who posed as a journalist. Mr. Kassrae has been spotted frequently near the home of the MEK in the country, Ashraf 3, and had been trying to recruit some of its members. He was working for the Iranian government and he was asked to leave when it became clear that he was spying on the opposition for the mullahs in Iran.

The Iranian regime’s recent examples of manipulation of media should serve as a warning to media outlets in the West that the Iranian regime has “friendly journalists” and lobbies across the world trying to push its agenda. It should also serve as a reminder that journalistic and research standards should never be pushed to the side.

And finally, the regime’s intensive efforts to demonize the Iranian Resistance shows just how threatened the regime feels. The fact that it has to try so hard to discredit its opposition shows just how weak and fragile the regime is.

How can Iglesias run a company that takes money from a dictatorship and produces the #Spanish-language satellite channel of #Iran’s state-run broadcaster IRIB designed solely to demonize the #MEK? #FreeIran2020https://t.co/MTq9h0zSi9