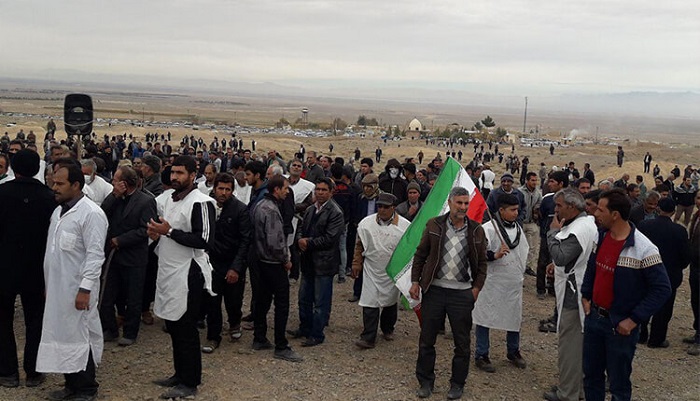 In the central part of Iran, farmers from the Kharsagan area of Isfahan took to the streets on Saturday 26th October. They were calling on the regime and the local officials to put a halt to plans that would take water away from them.

The regime has a project in place to divert water from the nearby Zayandeh Rud River to a steel mill and factory – one of the regime’s business interests.

The protesters were able to gain access to the courtyard of the steel mill and they stormed the factory head’s office.

Farmers in this part of Iran have previously launched a number of protests for their rights. In November last year, farmers from the eastern part of Isfahan protested about the Iranian governments corruption and mismanagement with regards to the local water resources. Over the past number of years, the regime’s policies (driven by greed and corruption) have seen many farmers lose water to their land resulting in the loss of their livelihoods.

The farmers have protested for months at a time and they are simply trying to get the regime to give them their right to water. The regime has systematically ignored their requests and the protest at the weekend was the farmers taking matters into their own hands.

On Saturday, after the farmers’ rally started, the regime sent anti-riot police units to disperse the crowds and to prevent the protest from growing in size. The protesters had gathered in front of a water pumping station that is managed by the notorious Islamic Revolutionary Guard Corps (IRGC). Water from this local waterway is taken as far away as a neighbouring province to provide the water needed by numerous regime-affiliated ventures.

At the beginning of the year, many farmers from the province travelled to Isfahan city to highlight the injustices that they face at the hands of the Iranian regime. They have been denied the most basic human right of access to water – something that is not just crucial for their daily needs, but also their livelihoods.

The farmers are understandably irate and the Iranian regime is concerned about the way the protests are going. Farmers and protesters in the region are often clashing with the security forces that are sent there to intimidate those gathering.

July 3 – Isfahan, central #Iran
Farmers rallying outside the governor’s office, protesting the closure of Zayandeh-rud River to their lands.
They are demanding their share of the river water.#IranProtests
pic.twitter.com/W7Z5rsvBJZ

During each protest, the people are making it very clear that they hold the regime responsible. They have been heard shouting slogans such as “death to the dictator”, something that very few would have dared openly shout until recently. The farmers have also made it very clear that they are determined to keep protesting until something changes. They have been heard chanting: “Farmers will die but won’t give in to disgrace.”

Dissent in Iran is punishable by the death penalty, but the situation has evolved so much in the past few years that the people are openly supporting the opposition and actively working towards the collapse of the regime.

Discontent is widespread the regime cannot keep a lid on it.