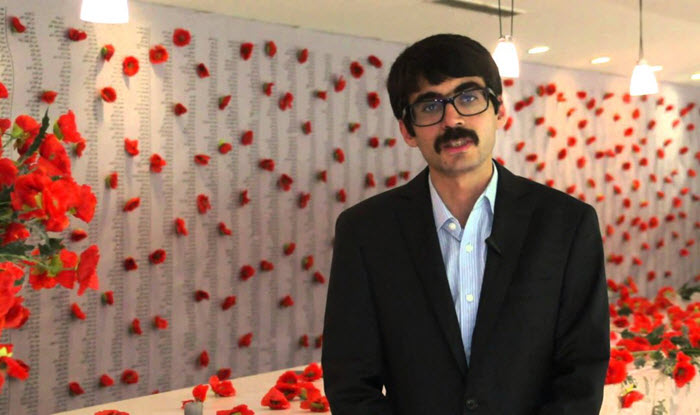 In an article on the Opportunity Lives website, Katrina Jorgensen shares the story of a former Iranian political prisoner who has a personal message for Americans.

Farzad Madadzadeh, a PMOI (People’s Mujahedin Organization of Iran) supporter, was arrested in 2009. He was a member, not a leader of the PMOI, one of the main Iranian resistance movements and a member of the democratic opposition coalition National Council of Resistance of Iran (NCRI).

He was in the notorious Evin Prison and Gohardasht (Rajai-Shahr) Prison in Karaj for five years and was tortured during this time. He spent six months in solitary confinement. He describes the interrogation technique as blurring into torture that lasted all day for weeks.

While he was in prison he found out that allies of the regime in Iraq had killed his brother and sister. He held a small memorial for them in prison and then underwent more torture because of this.

He said that while in prison several of his friends, fellow political prisoners, were killed. Some of them included Ali Saremi, Jafar Kazemi and Mohammad-Ali Haj-Aghai, he said.

In 2013, while he was in prison, Hassan Rouhani was elected president. He thought this would bring about change for the better, but the reality was the opposite. He said that there were more political prisoners and more executions. “We felt from the moment that Rouhani came to office executions suddenly increased. It’s about three years since he has been in office, and [there have been] 2,600 executions since then.”

Madadzadeh also points out that Rouhani failed to deliver his economic promises that within 100 days of taking office he would turn the economy around. This did not happen and so he passed the blame. “He said everything was tied to the nuclear deal and issues with sanctions… that the nuclear deal would benefit us, our dinner tables (…) “But what I witnessed inside Iran is that within the last two years, the price of everything went up, despite the official government figures. The only benefit of lifting sanctions is for [Syrian President Bashar al-Assad] and Hezbollah. They have been on the receiving end.”

A year has now passed since the nuclear deal and Rouhani has shown that he is not a moderate at all. Madadzadeh escaped to Europe once he left jail because the regime “is based on the pillars of terrorism and human rights violations”.

“The only option for me that was left was to go abroad and bring their voice to the international community. (…) In particular, the voice of the young Iranians, that would like to inform Western politicians that they want change.”

He said: “The people of Iran are not asking for any agreement, even a nuclear agreement… the people of Iran are looking for a change in the regime… and to learn of their plight and feel their pain and stand on the side of the people. Iranians showed it in 2009 that they want regime change. The Iranian people do not want a military invasion of Iran or for Americans to overthrow the regime for us, but we want them stop assisting the regime and cut ties.”

Madadzadeh attended the “Free Iran” rally in Paris on 9th July along with other former political prisoners and leading politicians from around the world. He said he hoped that Western leaders and US officials are now more informed about the Iranian Resistance as a result of the event.

Former Speaker of the House Newt Gingrich said at the event: “I want you to know that the message I will take home to America is that there are thousands and thousands of Iranians: who are prepared, who are ready, who are committed, and who believe that we can truly bring democracy to Iran.”

Madadzadeh said: “If Western governments want to fall on the right side of history, they should hear the voice of the Iranian people and their resistance movement… people who for many, many years forewent everything, even their livelihood, for their people and their nation.”