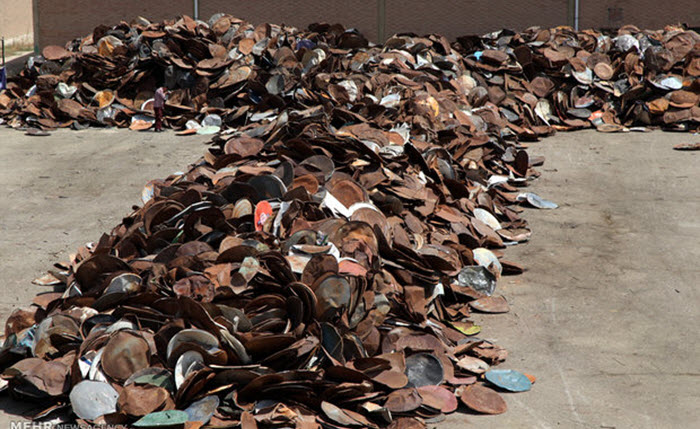 On Sunday the Iranian regime destroyed more than 100,000 satellite dishes and receivers according to an article published by the National Council of Resistance of Iran (NCRI). This is the latest in the regime’s “widespread crackdown against the banned devices”.

“The destruction ceremony took place in Tehran in the presence of General Mohammad Reza Naghdi, head of the Iranian regime’s Basij militia, who warned of the impact that satellite television was having in society.” He said that most satellite channels “deviate the society’s morality and culture”. He added that he believed that televisions cause more divorce, addiction and insecurity in society.

The NCRI highlight that under the Iranian regime’s fundamentalist laws, “satellite equipment is banned and those who distribute, use, or repair them can be fined up to $2,800 (2,500 euros)”.

They also point out that the regime regularly carry out raids and confiscate satellite dishes from rooftops.

Ali Jannati, the regime’s Culture Minister, said on Friday that most Iranians continue to watch satellite channels. He said that reforming the law is very necessary because most people use satellites despite it being strictly prohibited. He said that about 70 percent of Iranians violate the law by owning satellite dishes.

On Sunday, Naghdi said: “Most of these satellite channels not only weaken the foundation of families but also cause disruptions in children’s education and children who are under the influence of satellite have improper behaviour.”

The regime has tried to jam signals in order to block the public’s access. The regime wants to “prevent the Iranian people from becoming privy to its egregious and nefarious conduct inside and outside of Iran or to be informed of anti-government protest, strikes and other activities by the Iranian Resistance,” said the NCRI article.

Mullah Mir Ahmadi, an Iranian cleric told Iranian state television last year that he believes satellite television is more dangerous than an atomic bomb. He said that satellite channels destroy the way people think and urged regime officials to launch new channels that propagate the regime’s stances in retaliation to the anti-regime channels.

The regime has admitted that around 40 percent of families in Iran can access the “Simaye Azadi” or INTV – a major opposition channel. They are a non-profit that operate 24/7 from Europe and they broadcast news and information to Iranians around the world via satellite and the internet.

The NCRI report that the regime has blocked approximately five million websites dedicated to arts, social issues and news. They also filter the contents of blogs and social media. “It also tracks down and arrests many online activists inside Iran. Many have therefore turned to INTV as a means of obtaining real information without being traced. INTV has played a unique role in breaking the mullahs’ censorship and providing the Iranian people with uncensored news and flow of information.”

Reports that expose the regime’s violations of human rights are banned. INTV provides “constant news, breaking news, talk shows, live question and answer sessions, art and cultural programs, special programs for the youth and women, and political satire to millions of Iranians all across Iran who tune in to watch with their satellite dishes”.

It relies heavily on Iranians from around the world who volunteer their time. Donations from people inside and outside of Iran cover the channel’s expenses. Gholamreza Khosravi, an activist of the People’s Mojahedin Organization of Iran (PMOI /MEK), was executed in Iran in 2014 for ‘enmity against God’ for collecting information and donating money to the Sima-ye Azadi station.