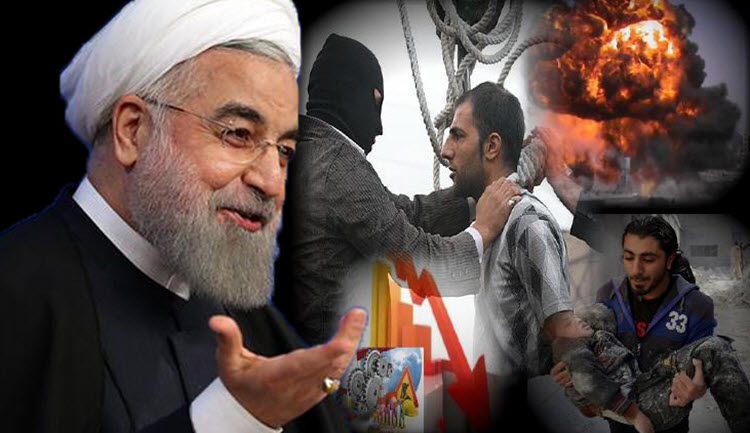 The National Council of Resistance of Iran (NCRI) has published a timeline detailing the major events of Hassan Rouhani’s presidency from June 2013 to the end of May 2016. The claims that he is running a moderate administration are contradicted by the facts.

– More than 2,400 executions have been carried out in three years making this the highest rate ever in the past 25 years.

– Rouhani called the executions the enforcement of God’s commandments” and “laws of the parliament that belongs to the people”.

– Amnesty International said in its annual report that Iran has the highest rate of executions per capita in the world.

– Iran is one of the only countries in the world that still executes minors.

– Iran still continues to flog people for trivialities such as holding same-sex graduation parties and protesting against job losses.

– Last month a British-Iranian mother and charity worker was detained without charge and separated from her one-year old baby after visiting family in Iran.

– Ethnic and religious minorities are denied due process and are more likely to be executed than other Iranians.

– Rouhani has led a crackdown on Iranian Christians. Some have been arrested for simply praying.

– Iran “is one of the largest customers of Internet censoring and filtering equipment”. More than 5 million websites are blocked and intensive efforts are made to filter blogs and social media.

– Women and girls in Iran are faced with extreme misogyny. At least 25 have been attacked with acid.

– Despite international appeals the regime executed Rayhaneh Jabbari in 2014. She was a 26-year-old woman who was defending herself against an intelligence agent who tried to rape her.

– Last month the Iranian Armed Forced Deputy Chief of Staff said that they had managed to test fire a “high precision ballistic missile with a range of 2000 kilometers”, even though the country is prohibited from firing any missile capable of carrying a nuclear warhead under United Nations resolution 2231.

– The UN Security Council’s Panel of Experts on Iran said in a confidential report that a rocket launch in October 2015 “met the criteria for being capable of delivering a nuclear weapon” – a violation of paragraph 9 of Security Council resolution 1929.

– Another ballistic missile test happened in November 2015. It too was capable of carrying a nuclear warhead.

– Missile tests were conducted for two days in March this year. They are said to be capable of reaching as far as Israel.

– Rouhani ordered an expansion of the Iranian regime’s missile program in December 2015.

Continued support for terrorism and export of Islamic extremism

– The Iranian regime plays a key role in the continuation of the carnage in Syria. It is clear that Syrian dictator Bashar al-Assad would have been overthrown long ago if the Iranian regime had not supported him. They have sent more than 70,000 troops to Syria.

– Agents of the regime ransacked and set fire to the Saudi Arabia Embassy in Tehran. The Saudi consulate in Mashhad, northeast Iran was also attacked.

– In September 2015, Rouhani told CNN that in Syria “we have no solution but to strengthen the central authority, the central government of that country as the central seat of power.”

– Iranian Deputy Interior Minister Morteza Mir-Bagheri acknowledged that the rate of unemployment has reached 70 percent in 1,200 towns and between 40 and 60 percent in 420 towns.

– Mohammad Soleimani, a member of the regime’s Parliament, said last month: “During Rouhani’s term in office more than 15 thousand industrial and manufacturing units have been completely shut down and the remaining units are active with less than 50 percent of their capacity. (…) Three years into Rouhani’s presidency, the number of unemployed people has climbed by about one million. The employment condition in the country is currently critical and as the Minister of Labor lately said, every five minutes one person becomes unemployed.”

– The Iranian people are becoming more restless. There have been more and more protests and strikes among the public, and dozens of political prisoners have started hunger strikes.

No change in key power players

– Ahmad Jannati, a 90-year-old cleric and one of “the closest confidants of Supreme Leader Khamenei”, was chosen as the head of the new Assembly of Experts.

Further details about the above events can be read on the NCRI’s website.