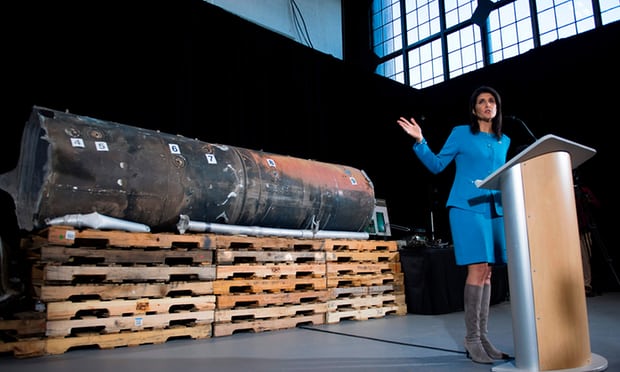 A representative for the Arab Coalition in Yemen confirmed that the Iranian Regime has indeed the terrorist Houthi militias with the weapons needed to target the international shipping in Bab al-Mandeb strait.
At a press conference in Saudi Arabia on Monday, Colonel Turki al-Malki said that the Iran-backed Houthi militias are targeting the Hodeidah port with boats filled with bombs, which presents a serious threat to shipping, world trade, and international relations.

Colonel al-Malki added that there is an international understanding of these threats.

Ballistic Missiles
Colonel al-Malki also addressed the fact that the Houthis have so far fired 95 ballistic missiles since the start of the conflict in 2015, but luckily they have been thwarted and destroyed by coalition forces every time.
One such missile was launched at Riyadh International Airport in November.

These missiles were supplied by the Iranian Regime according to US Ambassador to the UN Nikki Haley. She presented the evidence, which included missile debris bearing Iranian hallmarks, at the Defence Intelligence Agency in December.

She said: “Everybody has tiptoed around Iran in fear of them getting out of the nuclear deal and they are allowing missiles like this to be fired over to innocent civilians and hurt and that is what has to stop. So we will continue to build the international community’s support to say this is not about the nuclear deal. This is about all other actions and the president will work with Congress on how we go forward in dealing with Iran in this way.”

Humanitarian Aid
Colonel al-Malki also confirmed that humanitarian aid is still entering Yemen through all entry ports, with food and medical aid trucks from Saudi Arabia has reached more than 400,000 Yemenis so far. He also said that the Iran-back Houthi militias have threatened many Yemeni tribes in the past few weeks.
Luckily, this is becoming easier as the Yemeni national army has achieved several sequential victories in al-Jawf
Colonel al-Malki said: “We have found a consent from all sides in Aden to restore stability to the temporary capital.”
He also revealed a Houthi terrorist cell in Marib was arrested.