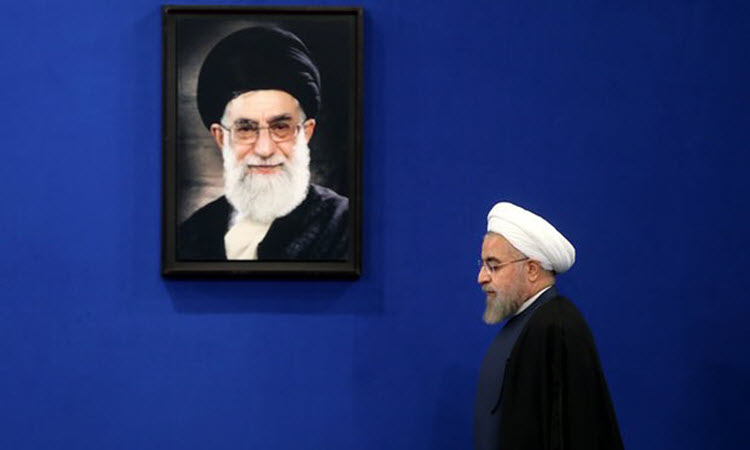 Since before the recent presidential elections in Iran, tensions between President Hassan Rouhani and the Supreme Leader Ayatollah Ali Khamenei have been getting worse. During the election campaign, Khamenei gave his backing to Rouhani’s rival, Ebrahim Raisi.

The Supreme Leader has been openly criticising the president and embarrassed and criticised him at a meeting which included many of the country’s senior officials, in particular the parliamentary speaker and the judiciary chief. He arrogantly sneered at Rouhani during his speech, saying: “Mr President has talked at great lengths about the country’s economy and well, he’s said ‘this should be done’, ‘that should be done’. But who is he addressing by mentioning the ‘should dos’? Himself.”

At this point, the audience laughed. Khamenei then said that the president of the Islamic Republic from 1980 to 1981 “polarised society in two camps, and divided the country into opponents and supporters”. He said that he does not want to see a repeat of this.

Abolhassan Banisadr was the first president after the revolution and he was impeached and eventually exiled after clashes with the clerical regime. Khamenei’s comments were clearly a warning that Rouhani could face the same scenario.

The Supreme Leader is worried about the future of the Islamic Republic and seems to be trying to prevent Rouhani from gaining popularity after the shock election results that he disagrees with. He is attempting to pull Rouhani down a notch. Rouhani, with his reaction, appears to be paying no heed to the threats though.

During the presidential campaign process, the Supreme Leader tried to sway the votes towards Raisi, claiming that Rouhani was encouraging homosexuality and letting Western culture seep into society (claims that Rouhani denied vehemently).

Rouhani, speaking about the elections, affirmed that democracy is not a “western gift”, pointing out that Iman Ali’s leadership was based on “people’s will and people’s vote”.

This is not the first time that relations between the president and the Supreme Leader have disintegrated. Former presidents Khatami and Rafsanjani had tension with him during their time in office.

An additional factor that has played a role in the tension recently is the uncertainty surrounding Khamenei’s succession, made all the more delicate due to his health issues following illness in 2014.

Khamenei outright criticism of the current president is an example of the instability in the Iranian regime. The highest officials of the country cannot even put on the appearance of coherent leadership.