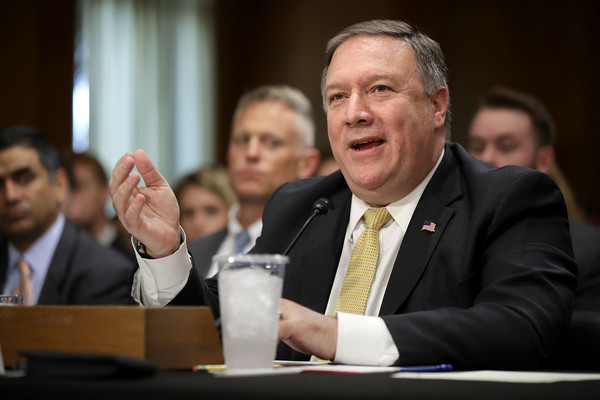 by Armin Baldwin
The new US Secretary of State Mike Pompeo recently laid out the Trump administration’s new Iran policy, including 12 steps that the mullahs would have to follow in order to get a new deal from the US
The most important of these steps are fairly obvious: stop enriching all uranium and stop supporting militant groups (i.e. Hezbollah, Hamas). These are so important that it’s hard to believe that they weren’t included in the 2015 nuclear deal, but that is one of the reasons that Donald Trump gave for his withdrawal.

If Iran accepted these new conditions, then the US would lift economic sanctions, re-open commercial activity, restore diplomatic relations, and provide access to advanced technology.
Essentially, this policy takes us back to a time before the nuclear deal, otherwise known as the Joint Comprehensive Plan of Action (JCPOA), was signed and takes away Iran’s upper hand.
The problem is that those who have done well out of the JCPOA don’t want to wind the clock back, including European leaders, the Iranian Regime, and the Iran Lobby.
A lot has been said about Europe and Iran’s response, but it’s also interesting to look at the Iran Lobby, who are the mullah’s mouthpieces abroad.

Jamal Abdi, president of the National Iranian American Council, criticised Pompeo’s speech in a statement that smacked of desperation, falsely claiming that the US policy will lead to war in the Middle East.
He wrote: “The Trump Administration is setting the stage for a war of choice with Iran, with Mike Pompeo offering a smokescreen of diplomacy to distract from the administration’s pursuit of Iraq-style regime change. Trump is renting out U.S. Middle East policy to the highest bidder – in this case Saudi Arabia, the GCC states, and Israel – and expecting ordinary Americans and U.S. service members to shoulder the burden of a regional escalation, a potential trade war with our allies, and a new Iraq-style regime change war in the Middle East.”

It’s certainly a stirring speech, but Adbi left out that the Iranian regime escalated the Syrian conflict, resulting in over 400,000 more deaths.
Laura Carnahan wrote on Iran Lobby: “Abdi doles out the same tropes the Iran lobby has used before, but now they ring hollow with the benefit of hindsight. The three years since the deal have shown how an unrestrained Iran has radically reshaped the Middle East and resulted in deaths from the Mediterranean to the Indian Ocean and the essential failure of the promises made by NIAC and the Iran lobby: the nuclear deal did not moderate the Iranian regime but unleashed it.”