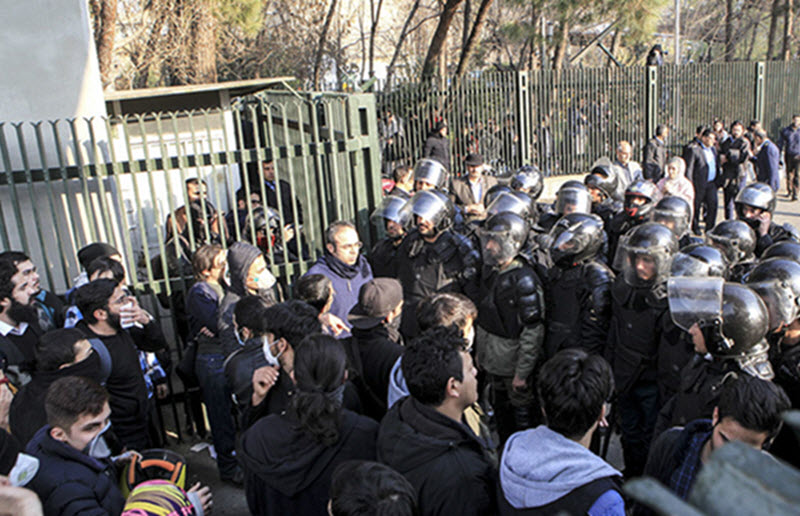 According to Radio Free Europe and videos posted to social media, rallies in Iran’s capital, Tehran, and in the cities of Karaj, Shiraz, Mashhad, Isfahan, and Qom have increased in number and ferocity. The Iranian people are giving voice their anger over the worsening economy and the plunging value in their currency. The return of U.S. sanctions on August 6th, per U.S. President’s decision in May to exit the 2015 nuclear deal between Tehran and world powers, is exacerbating the situation.

A protestor was killed on August 3rd, according to semiofficial Fars news agency, when someone fired a gun from a passing car. Fars also reported that about 20 protesters in Karaj were detained by security forces.

Dozens of protesters in the capital, Tehran, can be seen in videos sent to RFE/RL (Radio Farda). Many are chanting “Death to Khamenei,” in a reference to the Supreme Leader. Other demonstrators could be heard chanting, “Iranians, shout your demands.”

Reports tell of a heavy police presence in the center of Tehran and in its northern neighborhoods. Other videos show police confronting demonstrators in the city of Karaj.

But, protestors are not being intimidated. Instead, they have become more aggressive. They recently attacked a Shiite seminary by throwing rocks and bricks. Along with the chants directed at top regime leaders, these protests are a serious threat to the regime’s control.

Another atypical aspect of the protests is that they are being initiated and led by women, according to eyewitnesses in the city of Shahin Shahr, north of Isfaham, the provincial capital. A witness told Radio Farda,“Unrest in Shahin Shahr began on Thursday morning (August 2nd) when a limited crowd of people, composed mainly of women, nearly fifty ladies, started chanting completely peaceful slogans protesting economic hardship.”

While the protest lasted only 10-15 minutes before the crowd dispersed, members of basiji militia forces began to appear throughout the city. “People were coming and going peacefully, as usual, when they saw themselves surrounded by the Special Unit forces who were riding motorbikes, carrying guns,” the witness noted, adding, “Soon, a heavy security atmosphere shrouded the city and made people restless.”

The Iran lobby were represented in a statement by Jamal Abdi, the newly installed president of the National Iranian American Council (NIAC), “Ultimately, like any other country, it is up to Iranians living in Iran to decide their country’s destiny.

Outside countries or interests who seek to exploit the legitimate grievances of Iranians in order advance their own ulterior agendas only undermine the will of the Iranian people. As outside observers, we will continue our efforts to defend universal human rights and hold the Iranian government accountable to its international human rights obligations.”

It seems that Abdi and the rest of the Iran lobby are using the same narrative the regime officials are using as publicized in the state media in Iran: the unrest must be the malign influence of some outside entity. The NIAC seems to think protesting against the regime is undeserving of U.S. support.

There is a definite lack of enthusiasm among the Iranian diaspora to support initiatives that only seem to benefit the regime, not the Iranian people.

And Abdi seems to acknowledge this in his inaugural message to supporters posted on the NIAC website: “NIAC’s strength and influence comes from the community we serve. My top priority is to build our organization through our members. Over the weeks and months ahead, we will be rolling out new initiatives to deepen our connections with our members – and the level of input you have in shaping our organization – and to expand our membership and build our community.”

Abdi’s installation may change the messenger, but the message doesn’t appear to have changed.

Outgoing NIAC boss Trita Parsi wrote an editorial in Middle East Eye attacking President Trump’s offer to meet with Hassan Rouhani without preconditions, anywhere, anytime. In it he claims that Iran could meet with the president in order to give him a PR victory and then leverage it to gain valuable concessions later, but the Iran’s do not want to do that. “To Tehran, concessions that would make America – and Trump – look good and give the impression of Iran submitting itself to America, even if only symbolically, are the costliest,” Parsi said. “Iran has long insisted that it would only negotiate with the US as an equal and with ‘mutual respect’.”

In other words, Iran’s leaders, given the opportunity to get concessions from the U.S. would prefer to say no. Meanwhile, the Iranian people lose.