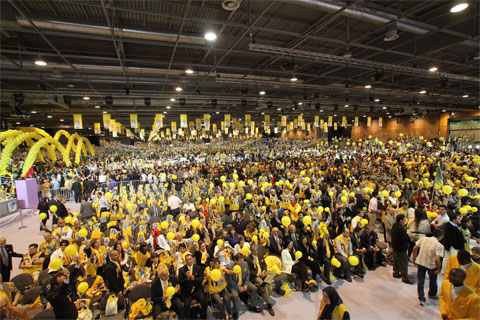 Yes, it is true that the world powers continue trying to talk the Iranian leaders to come clear with the country’s clandestine nuclear program.  And that they have also expressed grave concern over Iranian rogue role in the region, in Syria, in Iraq and Lebanon, and recently in Yemen.   But that is really not all that is shaping this picture.  There is more going on.

On June 13, in Paris Maryam Rajavi, President-elect of the National Council of Resistance of Iran is attending a grand rally held by the organization known world-wide by its Farsi name Mujahedeen-e Khalq of Iran or MEK in order to tell the world once again that there is another side to the Iranian story and that is the story of the Iranian people and their struggle and ambitions to establish a new democratic government in the country.  One that will no longer build nuclear weapons or meddle in the neighboring countries and wage war and one that will respect the rights of Iranian citizens and put an end to the mass public executions that are currently shocking the world human rights advocates on daily basis.

Holding large rallies against Iranian mullahs’ regime is nothing new for MEK. Above a hundred thousand showed up at a similar rally last year in Paris.  A raw of US and European dignitaries and public personalities including Mayor Rudi Giuliani, former House Speaker Newt Gingrich, and Former Prosecutor General Michael Mukasey were among many more participating, adding their voices to that of the Iranian opposition in Paris.

As Ken Blackwell aptly points out in his article “Let’s bring the voice of the Iranian people into our Iran Policy” the MEK rally later this week is “enormously relevant” to the question of “policy on Iran”.

The western powers need to realize and bring to account that Iranian picture does not end with the fundamentalist clerics running the country.  But Iran has a powerful and well organized movement, one that is capable of staging rallies of tens of thousands and one that will be able to bring about a positive turnaround to the Iranian deadlock.

In fact MEK, through its informant networks inside the country, was the original cap blower of the Iranian regime nuclear program back in 2002; a fact that is realized and repeatedly admitted by western officials.

Through these rallies, the MEK and President Maryam Rajavi have pressed upon the US and Western countries that a conciliatory tone in talks with Iran and giving incentives and easing on the sanctions will only embolden the Iranian mullahs to continue their deceptive tactics and try to buy more time to get even closer to the nuclear bomb.

The June 13 rally held in Paris by the MEK should be supported by all those who want to see peace to prevail in the Middle East and terrorism to end in the world.  All we need to call for is “freedom in Iran”.