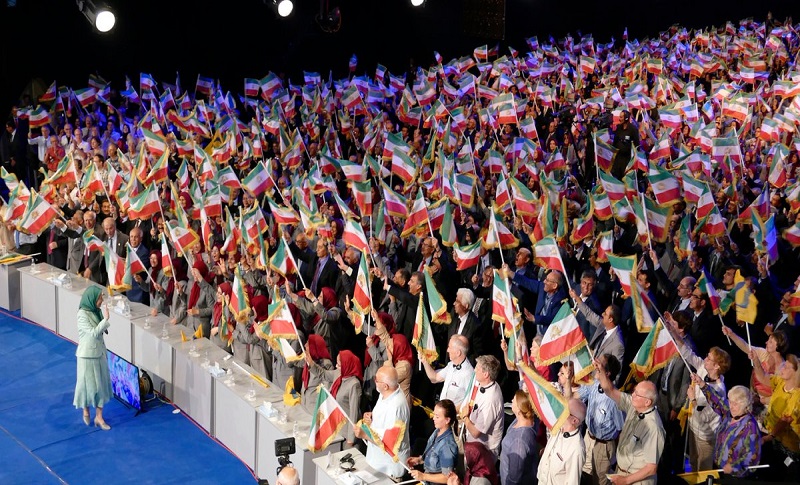 As the Iranian Regime increases its nationwide crackdown against the Iranian people, especially those voicing dissent, Resistance Units, formed by supporters of the People’s Mojahedin Organization of Iran (PMOI, Mujahedin-e Khalq or MEK), have increased their anti-regime campaign by plastering posters of Maryam Rajavi, the President-elect of the National Council of Resistance of Iran (NCRI) coalition, in public places in Tehran, Shiraz, and Mashhad.

The NCRI also reported that the defiant young people across Iran have been setting fire to the Iranian Regime’s icons and buildings of its suppressive forces. During the period of October 3-5, the brave youth of Iran began torching massive posters of the regime’s Supreme, Leader Ali Khamenei and other symbols of the Regime in Fassa, Karaj, Kouhdasht, Mashhad, Nowshahr, Rezvanshahr, Sabzevar, Semnan, Shiraz, Tehran, and Zahedan.

They also put up posters of Rajavi with slogans like “mullahs must go”, “rise up and bring down the religious dictatorship”, and “down with Khamenei, hail to Rajavi”.

These actions coincided with the uprising by the people in Lordegan, where angry young people set fire to Lordegan’s provincial governmental office, the office of Khamenei’s representative and Friday prayer leader, and a number of other governmental centers. Their protests began after it was discovered that the local health authority had infected 300 villagers with HIV by using contaminated needles during a diabetes test.

There were protests in at least three other cities in Iran this past week.

In Arak, Azarab factory employees gathered on Monday to protest not getting paid for some months and the uncertain status of stockholders, but the Regime dispatched anti-riot units to attack the peaceful protesters, even using tear gas. The security forces then blockaded the parking lot and surrounded the area.

Rajavi sent a message of support to the workers via Twitter.

She wrote: “Hail to the brave workers of Azarab, Arak, who did not succumb to the clerical regime’s threats and intimidations, continuing their protest today. The regime again responded by tear gas, arrests, and beatings. Such oppression will be foiled by the courageous workers’ willpower.”

At the same time, hundreds of farmers in Isfahan gathered in Teeran Square to protest the Regime’s plan to divert water from the Zayanderud River to benefit the officials and deprive the farmers of water for their crops. They then headed to the Zayanderud Dam to stop the Regime.

Meanwhile, the employees of the Haft Tapeh Sugar Cane Company in Shush held a gathering at the company courthouse to support unfairly dismissed employees and demand the release of their jailed co-workers. They’d previously held a nine-day strike in September, which continued despite threats from the regime’s Ministry of Intelligence and Security (MOIS).