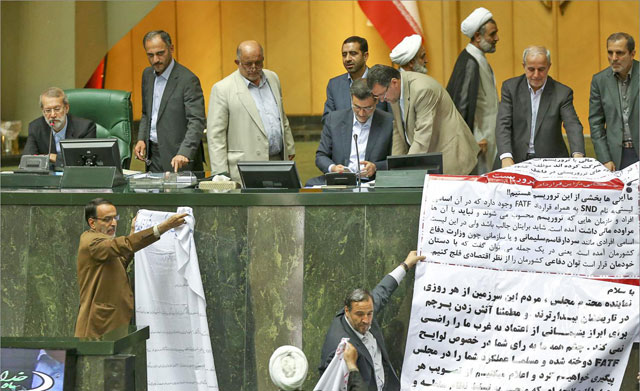 Unites States President Donald Trump announced last month that the US would be exiting the Joint Comprehensive Plan of Action (JCPOA), or the 2015 Iran nuclear deal as it is known. This means that the crippling economic sanctions that were lifted when the deal was implemented will now apply once again (after a grace period). There has also been much discussion about completely new sanctions that will be imposed.

The Iranian regime is unsure what the future will hold and the government is divided on whether to fall into line with international regulations regarding money laundering and the financing of terrorism. At the beginning of the week, members of the Iranian parliament voted 130 to 103 in favour of suspending the debate about joining the United Nations’ International Convention for the Suppression of Financing of Terrorism (despite the bill being approved by the cabinet last year)
This means that Iran will continue to be on the Financial Action Task Force’s (FATF) list of jurisdictions that presents a high risk. The FATF is an inter-governmental and policy-making body that sets standards and promotes the “effective implementation of legal, regulatory and operational measures for combating money laundering, terrorist financing and other related threats to the integrity of the international financial system”.
North Korea is the only other nation on the list.

Two years ago, Iran agreed that it would take steps to move towards being removed from the blacklist. This included joining the UN convention. The FATF has suspended sanctions against the country while the plan was being implemented, but it said earlier this year that Iran has dragged its heels and that most of the items on the action plan had not been implemented.
Iran’s conservative politicians do not want to sign up to FATF regulations in case it could adversely affect the regime’s ability to finance its proxy groups (such as Hezbollah and Hamas). Their justification is that the United States would have increasing leverage over Iran.
The National Council of Resistance of Iran (NCRI) has been drawing the international community’s attention to Iran’s support of and reliance on terrorist proxy groups for several years. The main opposition to the regime has repeatedly called on the relevant parties to oblige Iran to end its support, but very little action has been taken.

On 30th June, the NCRI will hold its annual gathering in Paris where politicians, policymakers, human rights activists and dignitaries will present ways in which the international community can move forward to curbing the Iran threat.
It has been proven that the Iranian regime was deceptive during the negotiations for the nuclear deal, and it was also deceptive to the FATF. In February, the draft legislation compiled by the Iranian parliament was enough to convince the FATF to continue suspending sanctions. This may change later this month after another FATF review which could result in Iran’s access to international banking being severely reduced.
The Iranian regime is being weakened by the recent setbacks and it does not know what way to turn.