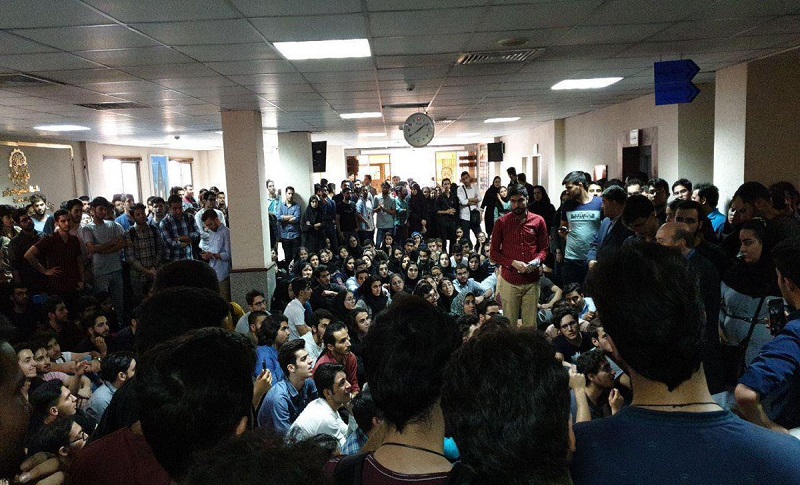 Despite the regime’s suppression on Sunday, October 14 students of Tehran’s Amir Kabir University held a demonstration in the Farabi campus against policies of the university’s administration and illegal costs imposed by university managers, reported the website of the People’s Mojahedin Organization of Iran (PMOI/MEK)
“Students! Support us” and “Shame on the university’s security,” chanted students.

Universities in Iran force students to pay high tuition while the regime wastes national wealth on terrorism and warmongering.

While Iran’s schools and universities are lacking minimum services, the regime is spending huge amounts on building schools and facilities in Lebanon and other neighboring countries to strengthen its clout and open pathways to meddle in their affairs and export its fundamentalist ideology.

Reports from inside Iran indicate that more than 177 protests held in Iran in recent months. These protests took place all over the country with an average of 6 per day.

Workers participated in more than 80 protests in 29 cities across the country last month. Many took to the streets because of unpaid wages, the dismissal of employees, the poor working conditions, the lack of job security and non-renewal of contracts, and the dismal pay scales. A number of the protests lasted several days.

The Iranian regime has ramped up its efforts to silence the people through violence and repression but the people are making it understood that they will no longer let the regime continue in this way. The regime has mismanaged the country for decades and the people are sinking further into poverty while regime officials continue to line their pockets.

There is no doubt that protests will continue for as long as the regime is allowed to continue with its corrupt rule that completely disregards all human rights.