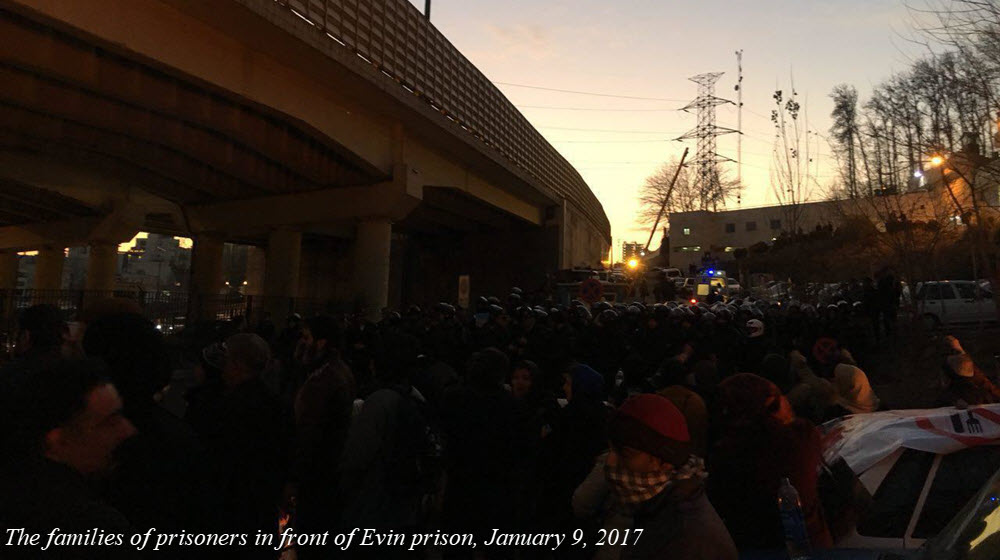 The protests that began in late December in the holy city of Mashhad spread quickly across the country, and involved more than 80 cities. They have accumulated a total death-toll of 21, and hundreds of arrests. In fact, more than 500 people were arrested in the capital city of Tehran alone, and local media says that more than 1,000 were detained throughout the country. The average age of those arrested is under 25, Deputy Interior Minister, Hossein Zolfaghari, said.

The Iranian government has announced that the protests have ended.

Still, on Sunday, some 100 people gathered together in the harsh winter conditions outside the notorious Evin Prison in Tehran, calling for their friends and family to be released.

One man insists that his son was arrested by mistake. He said, “I don’t want trouble. I just want my son released.”

Another man waited outside the prison for the release of his friend Hossein, who was arrested on December 29th. He said that Hossein participated in the protests because, “He was angry, like many people.” Hossein apparently saw a man grab the cellphone of a woman who had been filming the protesters, and he “chased him, but he turned out to be a plainclothes police officer,” Ali said. “I’m bringing the deed of his house, so he can post for bail.”

Those waiting outside Evin Prison on Sunday claim that only dozens of detainees have been released, while hundreds remain within.

Reformist activists wrote a letter that was published on the front page of the newspaper Etemaad on Sunday. They calling for the release of the protesters. They said that Iranians have a right to protest. “People feel belittled and hopeless,” the letter said.

The protest brought the country’s declining economic conditions, corruption and a lack of personal freedom into the spotlight.

On Sunday, a makeshift camp was set up under one of the prison’s watchtowers. Protestors gathered around a campfire, and pitched tents in which to sleep. They chanted, “The political prisoners must be freed,” as people filmed them with their phones, and guards looked down from walls and watchtowers above.

In Iran, activism often leads to punishment, imprisonment or even execution. Hundreds of journalists, bloggers and activists have been detained over recent years. Charges can be imposed on those who seem to not be doing anything wrong.

In 2009, during Iran’s last anti-government demonstrations, thousands were arrested. Temporary prisons were established because Evin was full. In one, the Kahrizak detention center in Tehran, it is alleged that several protestors were tortured and three died. Supreme leader, Ali Khamenei called for a full investigation of the case and several officers were sentenced to jail, but not all served the sentence.